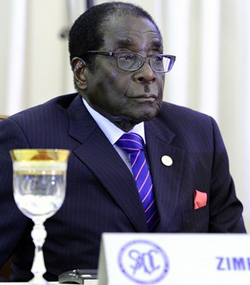 ONCE again the celebrations of Robert Mugabe’s birthday came and passed. Again the day provided occasion for speculation, not only about the aged leader’s health, but also about the size of the birthday cake and the amount it cost. For those in Mugabe’s Zanu PF party, the occasion heralded open season for fawning at his feet and the intensification of scrimmaging over his succession. Speculating, fawning and scrimmaging that usually border on the ridiculous has become a yearly thing in Zimbabwe. Year in, year out, the sheer amount of tomfoolery can evoke laughter even in the midst of the most uncertain times in Zimbabwe. But sooner or later Zimbabwe has to realize that the issue of leadership is no laughing matter.
At 90, Mugabe is surely in his twilight years. He is flesh after all. So every birthday (at least since five years ago) is bringing the country closer and closer to the inevitable – his death. And this is coming at a time when no thought has been given on where we are supposed to take our beloved country as the era or mistakes, blunders, buffoonery and even devilry seems to be coming to a close. Mugabe’s reign will never be missed. The same goes for his purported opponent, Morgan Tsvangirai.
The era of the duet provided the nation with important lessons of things that should never be repeated. For those of us who still hope for a better Zimbabwe for ourselves and for our posterity, our recent history taught us that a nation should never allow the leadership of a country to be a one-person pet project or a possession to a coterie of servicemen, who serve nobody else other than themselves. It is a great lesson that some even in our main opposition movement seem to have completely missed.
There’s ample evidence to suggest leadership failure, if not the total absence of leadership in Zimbabwe. One should not look further than the experiences of the victims of man-made floods in the Tokwe-Mukosi river basin in Masvingo to see that there is a huge problem with leadership in Zimbabwe. Yes, the floods were man-made because the Tokwe-Mukosi dam which could have been completed years ago, and could have easily held back the gush, is now nothing more than a campaign tool that is paraded before voters every campaign season. There are many more uncompleted projects across Zimbabwe than are now presenting dangers for people in Zimbabwe.Advertisement

That said, the lack of response from leadership in the ruling party and also in the opposition parties was nothing less than callous. At a time when an estimated 60,000 fellow Zimbabweans were struggling against vengeful floods the ruling party and the First Family took part in unrestrained bacchanalia. Members of the MDC-T were engaged in an embarrassing catfight for positions in Harare. Not even moral support was rendered to the poor souls in Masvingo. As far as I know, the only visible public figure who gave the people of Masvingo something close to empathy was musician, Alick Macheso; hats off to Alick.
Anywhere else in the world, at least where real leadership exists, such levels of debauchery by a country’s leadership at a time when a significant section of the population is facing a dangerous emergency like flooding cannot go unpunished. In fact by ignoring people during a time of emergency a leader’s survival in the next election is not guaranteed, if they do not get impeached. We often hear of leaders like Barack Obama cancelling important foreign visits to attend emergent domestic problems, for example during the Gulf of Mexico oil spill. Recently, leadership in the United Kingdom jostled to visit the flooded coast of south England. At least they showed up. Whether these leaders did it out of concern for their people or not, is another debate altogether, but at least they showed concern. The Zimbabwean leadership’s answer to that comes in form of uninhibited revelries, miles away from their piteous subjects.
The challenges facing Zimbabwe today are so daunting, and there is an urgent need for committed individuals. To put it bluntly, Zimbabwe does not need ‘anointed’ leaders, or leadership based on any other pseudo-religious entitlements. Time and again we have been told by some religious and traditional leaders alike, that Mugabe was ‘chosen’ by God. And as if not to be outdone by Zanu PF, members of Tsvangirai’s MDC-T party are beginning to deify him, declaring him an ‘anointed’ one. But again we have already seen and experienced ‘anointed’ leadership since independence in 1980. The ‘anointed’ ones are larcenous, licentious, and murderous – the list of their vices is endless. The worst thing about their vices is that they do not affect them, but they do cost the country dearly. It is the ordinary Zimbabwean who bears the brunt of such reckless leadership.
As a new dispensation is in the offing for Zimbabwe, we also need a new caliber of leadership-groomed and ready to lead, not those who get into leadership positions by accident. For the past 33 years Zimbabwe has been getting a raw deal when it comes to the issue of leadership. There has been a constant recycling of the deadwood in government and other institutions critical to the country. Mind you some of these people have recorded failure after failure in their generation-long careers. If anything they have participated hands-on in plunder and misrule, turning the country into a place where entropy rules supreme. Our recent history is pockmarked with horrendous corruption scandals, sex scandals that boarder on misogyny, and even assassinations, but very few, usually scapegoats, were held accountable. It is public knowledge that the real culprits are usually left free to strike again and again and again. This lack of accountability by our leaders is the proverbial elephant in the room and we should not ignore it as we brace for the end of a forgettable era in Zimbabwe.
The future Zimbabwe that we want has to come out of a blueprint drawn up by a congregation of people who genuinely want to see the country bounce back from oblivion. One thing that could feature in that blueprint is the establishment of non-partisan academies across the country, and these will groom the brightest young minds for the future leadership of the country. Whatever political party they join afterwards will be a personal choice; in fact an inalienable right. Those who pass through such grooming will never see the government as a gravy train, but will put the prosperity of Zimbabwe ahead of their own interests.
Those who will lead the country have to be tried and tested in junior positions of less responsibility where the consequences of their blunders are not too grave. Making mistakes or misbehaving while carrying out duties that affect a population of nearly 15 million people should never be tolerated in future. The current unfortunate culture of cruelly stifling voices of dissent and curtailing the talent and innovation of able people should be discontinued, because that has been the bane of our nation.
The Mugabe era is in its twilight hours and we do not want to find ourselves stuck with another selfish ‘anointed’ leader for another two generations. We do not want to experience another era of leaders who are keen to hear sensual voices than dying mothers in maternity wards of rundown clinics. We do not want another generation of leaders that go on a binge while ignoring the voices of their drowning subjects. Never again to a generation of leader plan vanity projects, like building a new city close to their rural homes, while millions of their fellow countrymen and women sleep in the open through the cold and rainy seasons.
Melusi Nkomo is a Ph.D candidate at the Graduate Institute of International and Development Studies (University of Geneva) Geneva, Switzerland. He can be reached at melusi.nkomo@graduateinstitute.ch