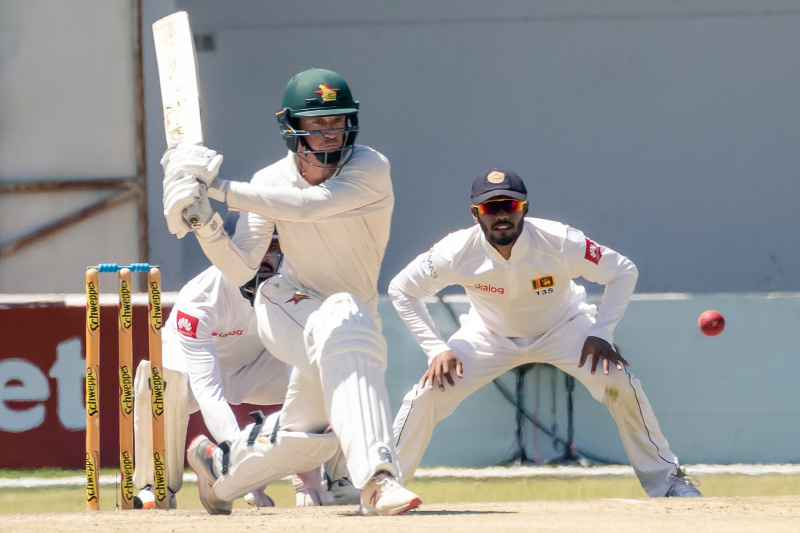 VISITING Sri Lanka took a 1-0 lead in the two-match series against Zimbabwe after wrapping up a comfortable 10 wicket victory on the fifth day of the opening Test match at Harare Sports Club on Thursday.

Zimbabwe, who needed to bat out the entire final day to force a draw, began the final day on 30 for no loss in their second innings and needing 147 runs to make Sri Lanka bat again.

The hosts however found the going tough as fast bowler Suranga Lakmal took four for 27 to set up Sri Lanka’s victory.

Zimbabwe recovered from the loss of three early wickets of openers Prince Masvaure, debutant Brian Mudzinganyama and Craig Ervine, who all fell to Lakmal in the first session as the hosts reached lunch at 120 for three.

The tall pace bowler struck again immediately after lunch removing senior batsman
Brendan Taylor and captain Sean Williams who had combined to put on 79 runs for the fourth wicket.

Lakmal provided the much-needed breakthrough to Sri Lanka in the 45th over as he dismissed Taylor (38) before immediately dismissing Williams for 39, reducing Zimbabwe to 120 for five.

Sri Lanka finally bundled out Zimbabwe for 170 as the hosts set a paltry target of 14 runs for Sri Lanka to win.

Allrounder Angelo Mathews was named man of the match for his 200 not out in Sri Lanka’s first innings of 515 for nine declared which ultimately proved to be the catalyst for the Indian Ocean islanders’ victory.

“I wanted to guo for a biggy,” said Mathews after the game. “It was very slow going and they gave nothing away with their umbrella field.

“We didn’t want to bat in the fourth innings. There was some variable bounce and turn. We wanted a lead of 160 so I had to make sure we got there.”

The defeat was a dissapointing finish for Zimbabwe who were confident of securing a positive result in their first Test match in 14 months after getting off to a positive start.

In the first innings, Zimbabwe had scored 358, courtesy of half centuries by Ervine (85), Masvaure (55) and debutant Kevin Kasuza (63).

Kasuza didn’t bat in the second innings after suffering a concussion while fielding during Sri Lanka’s first innings and waa replaced by substitute Mudzinganyama.

In reply Sri Lanka declared on 515 with the help of Angelo Mathews’ maiden double ton.

Williams, who was leading the Zimbabwe side for the first time in the series said he was happy with the way his charges had performed in their first Test after a long hiatus.

“The guys have tried their hardest. There’s going to be hurdles we’re going to have to cross as a team, but it’s (captaincy’s) been enjoyable.

Sri Lanka and Zimbabwe will now take on each other in the second and decisive Test from January 27 at the same venue.