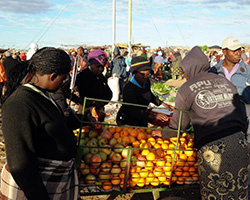 THE economy continued on a fresh slide into deflation in December as prices fell due to tight liquidity, figures from the government statistics agency on Thursday showed.
Prices decreased by an average of 0.80 percent between December last year and the same month in 2013.
“The year on year inflation rate for the month of December 2014 as measured by the all items Consumer Price Index (CPI) stood at -0.80 percent, the Zimbabwe National Statistical Agency said in a statement.
That is down marginally from -0.78 percent in November.
The country’s economy has been on a downturn for over a decade characterised by high inflation, unemployment and deteriorating living standards.
It slid into deflation in February, staying negative for five months in succession as prices fell due to a cash crunch which saw fewer buyers for goods and services.
Prices recovered marginally going in the positive from July only to fall back into deflation in November.
Finance Minister Patrick Chinamasa has lowered the growth forecast for this year from 4.1 percent to 3.2 percent.
The government, saddled with a huge debt, has been battling to pay its workers and resorted to staggering dates to pay bonuses.Advertisement