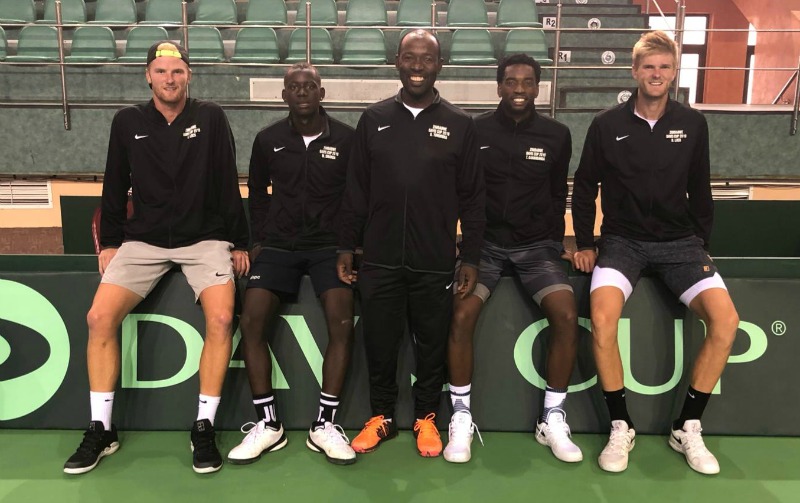 The Zimbabwe Davis Cup team in Romania
Spread This News

THE Zimbabwe Davis Cup team is in a positive mood as it prepares to take on Romania in a crucial Davis Cup Europe/Africa Group II tie to be played at the Sala Polivalentă Indoor Arena in the Romanian north-western city of Cluj-Napoca.

The tie will see the two teams clash in four singles rubbers and one doubles rubber contested over two days on Friday and Saturday.

Benjamin, who has been enjoying a good run of form with his brother Courtney on the professional circuit, told NewZimbabwe.com from Romania that preparations were going on well ahead of their crucial Davis Cup tennis tie this weekend.

“Everyone is pretty excited and we are all in good spirits to be here. After taking a day to recover yesterday (Sunday) following a long journey to the city which is hosting the tie, we had our first full training at the match venue and it’s really a nice venue,” Benjamin said.

“The training went very well and I really like where the team is at this stage in terms of chemistry and morale. Playing wise, everyone is hitting the ball great and pretty sharp and we are very happy with how everything is going so far.

“In terms of the conditions, the court is pretty much on the quicker side which suits us and I think we’re all very comfortable playing on indoor hard courts and its one of our stronger surfaces.

“So, basically everything is going great and we’re looking forward to a few days of practice before the tie.”

Zimbabwe, who are ranked number 61 in the world, will start the tie against the number 42 ranked Romanians as underdogs.

The Romanians have two players ranked inside the top 100 in singles on the world rankings in Marius Copil (73rd in singles) and Horia Tecau ranked 31 in doubles while Zimbabwe’s highest top players Benjamin and Garanganga are ranked number 450 and 547 in singles respectively.
This will be Zimbabwe’s second meeting with Romania; after their only ever meeting saw the Europeans win 3-2, at the City Sports Centre in Harare back in 2000. Zimbabwe will however be hoping for a change of fortuness this time around.

The winner of the first round tie will progress to the 2019 Davis Cup Europe/Africa Group II second round with the losers expected to battle for survival in the relegation play-offs.