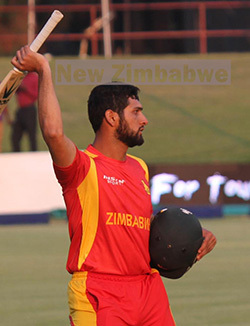 Zimbabwe 222 for 8 (Ervine 60, Raza 60*, Dockrell 2-29) beat Ireland 219 for 8 (Wilson 70*, Joyce 53, Nyumbu 2-35) by two wickets
CRAID Ervine and Sikandar Raza both hit 60 as Zimbabwe clinched a two-wicket win over Ireland in the first of three ODIs in Harare.
The hosts restricted Ireland to 219-8 from their 50 overs, Gary Wilson scoring an unbeaten 70 and Ed Joyce adding 53.
Ireland reduced Zimbabwe to 171-7 before Raza’s unbeaten knock helped them to victory with an over to spare.
The second game takes place on Sunday before a potential decider on Tuesday.
Paul Stirling (24) and Kevin O’Brien (16) contributed to a modest Ireland total while John Nyumba (2-35) and Wellington Masakadza (2-45) each picked up two wickets.
Spinner George Dockrell was the pick of the Irish bowlers with 2-29.
Ireland hope to end the series still ahead of Zimbabwe in the world rankings.
The Irish started the series in 10th and Zimbabwe 11th, with the tourists holding a two-point advantage over their rivals.
Zimbabwe fell to a 2-1 series defeat by Pakistan in Harare last week.Advertisement