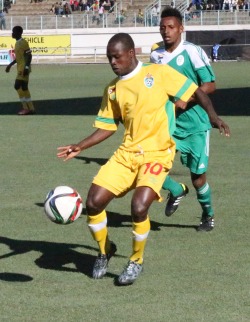 A Beautiful first half goal by Hwange forward Evans Rusike and another at the death by FC Platinum’s Marshall Mudehwe helped the Warriors to a comfortable victory over the Comoros in a preliminary round, first leg of the 2016 African Nations Championships at Rufaro Stadium on Sunday.
Zimbabwe dominated the match, especially in the first half and could have buried their opponents under an avalanche of goals.
They were, however, not clinical with their finishing with Wisdom Mutasa being the chief culprit.
Nqobizitha Masuku had a chance nine minutes into the match but shot straight at the keeper.
However, Rusike dribbled past a couple of defenders before drilling a low shot that beat Comoros goalkeeper Said Halifa to thrust Zimbabwe into the lead on 10 minutes.
That goal spurred on the Warriors as they continued to attack their opponents relentlessly, but Mutasa blazed over on 35 minutes following a wonderful delivery from Blessing Moyo.
Masuku also missed a good opportunity after Thomas Chideu headed a good ball into his path on 43 minutes.
The visitors, who had one of their technical team members red carded for remonstrating with the match officials, barely troubled Warriors goalkeeper Bernard Donovan.
They were overpowered by the Warriors, especially in midfield where Danny Phiri and Masuku controlled with aplomb.
But the Comoros came into the second half trying to breakdown the home team, and on 46 minutes, captain Mikjadi Dauouda had a chance but watched in disappointment his effort saved by Donovan. On 56 minutes, Chadhuri Mradabi unleashed a thunderous shot which however drew a fine save from Donovan.
A minute later, Mutasa missed a headed opportunity and Rusike had his effort blocked by the keeper on 67 minutes from a set up by Moyo.
But Mudehwe, who came on as a substitute on 67 minutes replacing the ineffective Mutasa, sew up the tie with a low shot, profiting from a pass by fellow substitute Tino Kadewera.
Coach Kalisto Pasuwa was pleased with the victory but said they still needed to improve in the attacking third.
“I am happy for the boys. They played well but there are still a number of areas we have to improve. We need to change our pace when in the attacking third. We missed a couple of chances and need to work on our shooting,” said Pasuwa.Advertisement