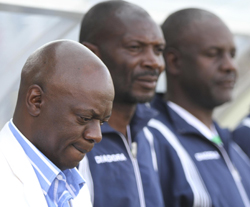 ZIMBABWE were handed a tough draw for the 2014 African Nations Championship (CHAN) finals in Cairo, Egypt, on Wednesday.

The Warriors will face Morocco, 2013 Africa Cup of Nations finalists Burkina Faso, Morocco and Uganda.Zimbabwe were seeded in Group B and will be based in Cape Town.
The draw was attended by coach Ian Gorowa, Zifa president Cuthbert Dube, his deputy Ndumiso Gumede and chief executive officer Jonathan Mashingaidze.
Gorowa told the media that progress to the quarterfinal would be determined by their preparations.
“It’s a fair draw for us and we need to prepare very well. We will have five weeks of conditioning the players. There are no small teams in football and everybody will be putting in the same kind of preparations. We also need friendly matches,” Gorowa said.
In 2009 and 2011, Zimbabwe failed to reach the last eight in the tournament which is only open to players from domestic leagues.Advertisement