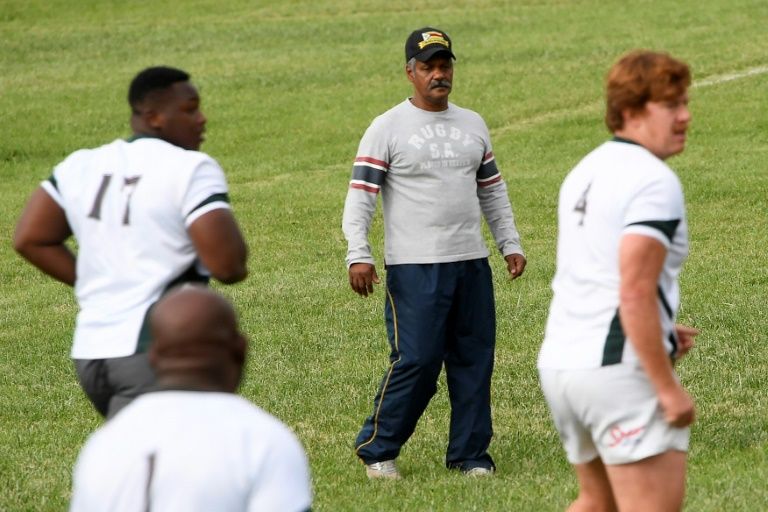 Zimbabwe's new national rugby coach and former Springboks coach Peter de Villiers takes part in a training session on June 29, 2018 in Nairobi, ahead of a rugby match against Kenya during the 2018 Rugby African Gold Cup, which acts as qualifier for the 2019 Rugby World Cup in Japan
Spread This News

ZIMBABWE is expecting a high octane encounter when they face Kenya in their crucial 2018 Rugby Africa Gold Cup in Nairobi on Saturday, a game which also serves as a 2019 World Cup qualifier.

The Sables, as Zimbabwe are known, have dominated the head-to-head battles between the two regional rivals and also have more to lose after opening their campaign with a 23-23 draw against Morocco at home two weeks ago.

“We are expecting Kenya to be highly aggressive. They attack the ball wide and are fast-paced,” said former Zimbabwe head coach Brendan Dawson.

“Kenya is a highly competitive side with big players. Their standard of rugby is a version of the Sevens, which brings a new dimension to the game,” added Dawson, who is deputising for the team’s new coach, former South African Springbok Peter de Villiers.

Zimbabwe beat Kenya 27-10 in Antananarivo in qualifying for the 2015 World Cup in England, but both sides failed to qualify for the tournament.

Brandon was in-charge of the Zimbabwean side that beat Kenya Simbas in 2012 in Nairobi to win the Africa Gold Cup but says the World Cup picture does not add any pressure to them.“It’s exactly the same, we want to qualify for the World Cup pressure is on us(Africa), the standards in the rest World is improving day by day so we need to keep up with the modern pressure and pace of the game. Yes, pressure is here; let’s say a bit of it but we want to qualify for the World Cup like everyone else.”Zimbabwe named the squad to play Kenya on Friday morning with prop Denford Mutamangira set to captain the side. Of the 25 Zimbabwe players who traveled to Nairobi, only Lucky Sithole and Ziyanda Khupe do not make the match-day 23 named by Peter de Villiers . Kenya Simbas head coach Ian Snook said his squad was looking good ahead of the match although he insisted on focusing on line-outs and breakdowns. “Obviously we’ve watched video of their game against Morocco we realize there will be a big test. It will be difficult.”“We are looking to improve on line-outs and set-pieces also a little bit of scrummaging. We’ve been working on that. Otherwise the mood is positive and we are ready to go on Saturday afternoon.”Zimbabwe starting line up1. Denford Mutamangira  2. David Makanda 3. Farai Mudariki   4. Johannes Stander  5. Fortunate Chipendu 6. Takudzwa Mandiwanza 7. Connor Pritchard  8. Tapfuma Parirenyatwa 9. Ernest Mudzengerere 10. Lenience Tambwera 11. Mathew McNab 12. Brandon Mandivenga  13. Kudzai Mashawi 14. Takudzwa Kumadiro 15. Shingirai KatsvereReplacements16. Mathew Mandioma  17. Cleopas Kundiona  18. Lawrence Cleminson  19. Kudakwashe Nyakufaringwa 20. Brian Nyaude  21. Jeremiah Jaravaza 22. Tafadzwa Mhende 23. Dylan Baptista