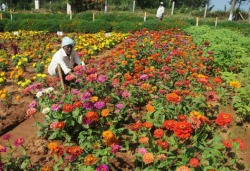 ZIMBABWE has recorded an increase of $5 million from its horticulture exports to the European Union over a period of one year, freshplaza.com an online portal has reported.
Exports increased fetched about $54 million in 2015 up from $49 million recorded in 2014.
EU in November 2014 lifted business embargo it had imposed on Zimbabwe in 2000 following a chaotic land redistribution exercise electoral violence.
The over decade long sanctions paralysed the country’s economy which was mainly relying on exporting agricultural products which included beef and horticulture.
According to freshplaza.com, Zimbabwe’s major export destinations in the EU were United Kingdom, Netherlands, Lithuania, Spain, Portugal, France and Germany.
“The Netherlands came out top as Zimbabwe’s major export destination during the year sitting at $35 million while the United Kingdom was second at $12 million,” reported the online portal.
The website said in order to promote further exports into the Netherlands, Zimbabwe and a Netherlands organisation signed a Memorandum of Understanding (MoU) to support agriculture and revive the horticultural sector and help revive Zimbabwe’s exports to the European market which, in the last five years, had remained subdued.
The MoU targeted the horticultural sector after realising that it was a sector of quick returns which at its peak in 1999 /2000 once reached exports of $143 million.Advertisement