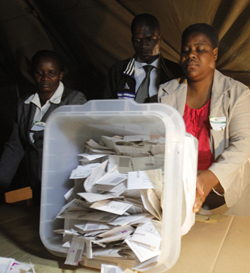 WITH compromised and weak national and regional institutions like the Zimbabwe Election Commission (ZEC) and the Southern African Development Community (SADC), prospects of a vibrant and viable culture of electoral democracy in Zimbabwe or Africa – especially sub-Saharan Africa are bleak.
The July 31 general elections revealed the following:
The Zimbabwe Election Commission (ZEC) was overwhelmed and overrun by the military and intelligence complex. Election commissioners became by-standers and in certain instances accomplices to the undermining of electoral processes at law.
In certain instances, the commissioners actively aided and abetted in the electoral heist.
The ZEC, like election commissions the continent over, is ground zero in regards to the future of elections as a means by which the people, the population of a given geographic area, participate in the regular selection of leaders of their choice. While a few African nations boast of a truly independent election commission, in the case of Zimbabwe the election commission was, has been and is a tool in the hand of a restless and corrupt military, intelligence complex.
With the overt influence the military and intelligence services exercised in the running of the July 31st election, it is difficult to envisage that the 2018 election outcome would be any different than the outcome of the July 31 election. In fact,  I foresee elections for the next decade or perhaps generation being manipulated in favour of the ruling elite and their progeny.
It follows that for the fortunes of a culture of electoral democracy in Zimbabwe and Africa, a solution must be found by Zimbabweans, with the support of Africans, to deal with an increasingly petulant yet compromised ruling elite and a corrupt or manipulative educated elite.
Africa is fast becoming a continent of barons and serfs, landlords and tenants, the haves and the have nots. Sadly, the masters of oppression are our own, and our children now contribute to their own oppression and that of their parents. Unless we, the African people, realise that our lives are being reduced to those of crumb pickers and not bread winners, that our erstwhile liberators have now become our masters and captors of our dreams and aspirations for freedom, and we fail to throw off the malaise, the spell of adoration and submission to errant authority, we will never be free, never be democratic, never be empowered, even in our life time.Advertisement

The propagated positive outlook being proffered by a class of the educated young Africans, of an African rebirth and Afro optimism are wild foolish dreams,  a delusion and illusion, unless we the African people incessantly strive to build credible national institutions.
The dire prediction of the demise of electoral democracy is not limited to the Zimbabwean experience. With the cowardly acceptance of the July 31 election result by the regional leaders, even in the face of evidence pointing to its fraudulent nature,  Africans in Malawi, South Africa, Mozambique and Namibia now face the scourge of  marginalisation and disenfranchisement in their immediate future, as each of these countries will be holding elections within the next 12-18 months.
SADC, the regional multi-lateral institution, labelled the July 31 election as free and ‘generally’ credible, but stopped short of declaring it fair. In their (SADC) tortured reasoning (or their purchased opinion), while the election processes were unfair (the voters’ roll was manipulated by denying urban dwellers the right to register and if registered displacing some voters from their wards; withholding of the voters roll; allowing unregistered people to vote; using fake voter registration slips; bussing people into targeted constituencies where they do not reside and allowing them to vote; villagers including teachers were frog marched and “assisted” to vote for a candidate dictated to them with the connivance of  traditional leaders; the state media declined to air the challengers’ political commercials or ads without first passing them through the hands of the incumbents’ political campaign, while never letting up on the biased political reporting and hate speech over the past four years) SADC still arrived at the conclusion that the election was generally credible. How can the result of an unfair process be credible or generally credible or even free?
Further, SADC met on June 15, 2013, in Maputo and agreed that the conditions prevailing in Zimbabwe were not conducive for the conduct of a free, fair and credible election. How then can SADC, now reach the conclusion that the same said election, held in the same said environment prevailing a mere 16 days before, be deemed credible or even ‘generally credible’?
SADC leaders led by the facilitator Jacob Zuma, with exception of Botswana’s Ian Khama, chose stability over democracy, relationships over principles. And this is the choice that has cast a dark capricious spell on the democratic fortunes of Zimbabwe and Africa.
Some African dictator, or fledgling despot, or despotess, may seek to test the same calculations Mugabe and his military-backed party executed without consequence in Zimbabwe.  And if questioned, or challenged, will simply point to the time in history when Africans made an exception to their own rules, to a time when the ideals of the Pan-Africanist liberation struggle, the ideal of one man one vote, was reversed not by a white colonial master or some neo-imperialist force, but by the nationalist movements themselves.
The decision by SADC and the impotent African Union (AU) to expediently endorse the outcome of the fraudulent and farcical July 31 election is akin to placing sanctions on the Zimbabwean people’s economic and political recovery.
With weak national and regional institutions, and the depraved indifference of the ruling elite to the poverty that subsumes the vast population of Africa, prospects for a culture of electoral democracy in Africa are fasting ebbing away.
Ralph Black is a foreign policy advisor to former Prime Minister Morgan Tsvangirai. He writes in his personal capacity. He can be contacted at blackbruce37@gmail.com