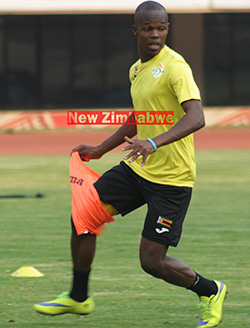 ZIMBABWE will hope to capitalise on their home ground advantage when they host Liberia for their opening Group G, 2019 Caf Africa Cup of Nations qualifier on Sunday afternoon at National Sports Stadium in Harare.
Caretaker coach Norman Mapeza is aware that he has a huge task in front of him and will hope to start their campaign with a win.
Replacing the sacked coach in Kalisto Pasuwa means the former Warriors international has to improve on their country’s hopes when it comes to continental tournaments.
Despite leading the team to the Afcon tournament in Gabon for the first time since 2006, the Zimbabwean Football Association parted ways with Pasuwa.
Mapeza has led the team once as they drew 0-0 against Zambia’s Chipolopolo in March, and he will now hope to get his first win in charge of the side.
However, the coach will need to find ways to unlock the Liberian defence as they will be without their key striker in Mamelodi Sundowns’ Khama Billiat, who has been ruled out of the tie with an ankle injury.
On the other hand, the presence of Belgium-based striker Knowledge Musona could cause all kinds of trouble for the visitors.
“Liberia will be coming here to fight. So we are trying to take each game as it comes,” Musona said ahead of the match.
“Consequently, we are looking at this match and then afterwards we will see how it goes when we resume next year.
“I am sure like what we did last time, when we started at home, we will also end the campaign well and there is need to work hard.”
Shifting focus to the Lone Stars, Liberia will come with a crippled squad as they will miss their skipper in Billiat’s club teammate at Sundowns, Anthony Laffor.
Coach James Debbah has a task to motivate his men and ensure they remain disciplined at the back to ensure they claim at least a point.
The Liberians are fresh from a 1-0 win over Sierra Leone in an international friendly on June 5 and will land in Harare in high spirits.
Liberia previously reached the tournament on two occasions, in 1996 and 2001, but failed to progress beyond the group stages on both attempts.
In their next match, the Liberians will welcome the Democratic Republic of Congo in March next year, and they will hope to win in Harare to boost their morale.
Although the two nations have met twice in the qualifiers, the first encounter produced a draw and the second one was a victory for the Zimbabweans.Advertisement