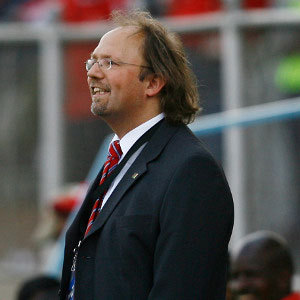 ZIMBABWE are facing another grim prospect of being expelled from the 2022 Fifa World Cup due to US$180,000 salary arrears owed to former Warriors Belgian coach Tom Saintfiet.
Interestingly, Saintfiet’s reign as Warriors coach lasted only a day in 2010 in which he conducted two training sessions before being deported for working without a work permit.
Saintfiet was embarrassingly chucked out of the country and travelled to neighbouring Botswana by road where he briefly stayed awaiting the issuance of his work permit before Zifa froze him out.
With his contract having not been terminated, the Belgium put more pressure on his case when Valinhos won his, to present another puzzle to cash-strapped Zifa.
Zifa chief executive officer Jonathan Mashingaidze admitted that the Saintfiet issue of haunting them.
“Fifa ordered us to pay Tom Saintfiet US$180,000 within 120 days from 31 August 2015 and we have been engaging Tom’s lawyers to find ways of extinguishing the debt,” Mashingaidze told the Herald.
“Our failure to clear this debut will leave Tom to invite Fifa to impose sanctions on us and the sanctions could see Fifa suspending us from the 2022 World Cup in Qatar.
“But it is our wish to avoid going that route and we just have to look for the money.”
Already, the expulsion from the 2018 World Cup has thrown the tenure of the current Zifa board on the wire as it marked the darkest ever moment in Zimbabwean football.
Zifa president Cuthbert Dube is likely to have his mandate revoked this Saturday by the association’s councillors at an extraordinary general meeting to be held in Harare.Advertisement