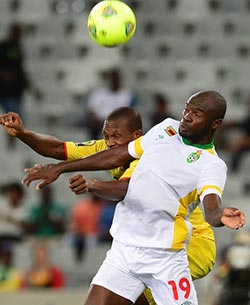 ZIMBABWE have emerged as dark horses for the 2014 African Nations Championship (Chan) title after making it through to the last four with a spirited win over Mali on Saturday.
The Warriors now face Libya in the semi-finals at the Free State Stadium in Bloemfontein on Wednesday with Ghana taking on Nigeria later in the evening.
Against Mali in their 2-1 victory in Cape Town in the quarterfinals on Saturday, the Zimbabwean side looked an inspired unit, playing energetic, high-tempo football. They tapped into the tangible support from their large fan base in South Africa.
Just reaching the last four was an achievement and a first for the Warriors.
With the team improving in every game during the tournament, there will be a growing belief that they can go all the way.
Ian Gorowa’s side based their success on a solid defensive record: in four matches at Chan, they have conceded just once – a last minute goal in their 2-1 win over Mali.
“We obviously play as a team, we try and do our best around the defence,” Gorowa said.
“If you don’t concede goals, then you have got a chance of scoring. That has been our philosophy — to try and defend very well.
“We have a player just in front of the defence, Danny Phiri, and I think he is doing a marvellous job in front of the four defenders.”
Gorowa could just have easily mentioned Peter Moyo, the Highlanders central midfielder whose huge energy and work-rate are major assets or Kudakwashe Mahachi, the talented left winger who scored a marvellous goal in the quarterfinals.
Having come this far, Gorowa was now hoping to keep the dream alive and hoped the trophy would end up in southern Africa rather than in west or north, traditionally the two powerhouse regions on the continent.
“I think that’s a great achievement for us – raising the flag of the SADC (Southern African Development Community) nations. It’s an opportunity which we have cherished and grabbed,” Gorowa said.
“We have always battled as a region, so at least here we are in the semi-finals.”
Wednesday’s semifinal against Libya kicks off at 5pm in Bloemfontein, followed by the west-African derby between Ghana and Nigeria at 8.30pm.
Advertisement