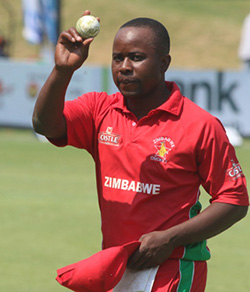 ZIMBABWE are in unfamiliar territory heading into their short one-day series against Ireland with opening batsman Hamilton Masakadza due to poor form while Craig Ervine returns.
It is not often that they can reasonably be expected to win a series, but they should have an advantage in home conditions and captain, Elton Chigumbura, admitted that this has created a different sort of pressure for his team.
“When we go out there we want to win every game that we play,” said Chigumbura.
“We’ve got more expectation on us to win these games against Ireland, so obviously there’s a little more pressure on us. So we have to rise to the occasion.
“It’s an important series for us. I’m sure if we play our best cricket we’ll come out on top. We’ve been looking forward to this series. It’s going to be hard cricket.”
Unusually, in recent months Zimbabwe have also had the task of managing the workload of some of their senior players a little more carefully.

We are expected to win against Ireland … Captain Elton Chigumbura