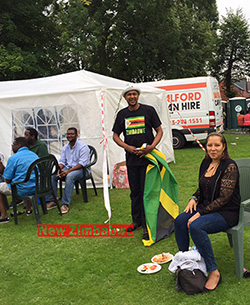 ZIMBABWE features prominently at this year’s Leeds West Indian Carnival with the country’s stand one of the most visited on Sunday.
Even more people were expected at the stand for Monday’s Carnival Parade – an explosion of colour with amazing costumes, addictive rhythms and an unrivalled atmosphere.
Organised by a social club based in the Yorkshire city, the Zimbabwe stand sought to bring diasporans together over the Bank Holiday weekend as well as promote the country’s cuisine and culture.
Chris Goshomi, part of the organising team, said it was the first time their club had participated at the mega carnival, adding they were impressed with the turnout and support from the local Zimbabwean community.
He promised an even bigger day on Monday.
“We have negotiated with FM Radio (with whom the club shares a stand) that Monday will be our day,” said Chris.
“Our most popular Zimbabwean DJ, KB, will be blasting from our stand. We have also taken account of possible changes to the typically temperamental UK weather.
“We have increased tents to ensure adequate shelter for the crowds.”
The carnival, one of Europe’s most adored Caribbean festivals, is an annual event whose main feature is Monday’s Parade featuring colourful and spectacular troupes with sound systems and steel pans on floats pumping infectious sounds of the Caribbean.
MORE PICTURES: