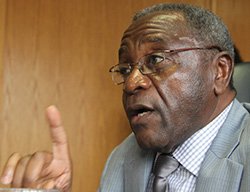 WHILE some of Africa’s finest football teams were battling it out at the Africa Cup of Nations in Equatorial Guinea, Zimbabwe were not only watching from a distance, they were in a turmoil.
Fifa issued threat to ban the country from international football if the government sacked Zimbabwe Football Association (Zifa) President Cuthbert Dube along with his entire board for gross incompetence among other charges of maladministration.
Zimbabwe has failed to qualify for the last five editions of the Africa Cup of Nations.
The sport in the country is in a deplorable state, the national association’s debts have ballooned to over $6m, and the national team – ranked 119th in the world – has become a punching bag of the continent.
Blame has particularly been laid squarely on Dube and the federation’s chief executive Jonathan Mashingaidze.
At the height of frustration, Deputy Sports Minister Tabeth Kanengoni-Malinga revealed in Parliament earlier this year that the government was ‘fed up’ with Dube and Mashingaidze and was ready to wield the axe.
AFCON woes
Zimbabwe were booted out of the qualification campaign for the 2015 Africa Cup of Nations in the preliminary round by Tanzania, the result viewed as an all-time low for the game in the country.
Zifa reacted by disbanding the entire national team, replacing it with an under-23 side, a move that was widely seen in the country as a smokescreen to hide the association’s failures.
Paul Gundani is one of Zimbabwe’s most experienced former players, earning over 70 caps for the national side – the Warriors – in the 90s.