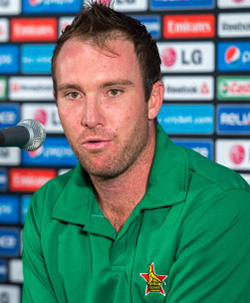 ZIMBABWE captain Brendan Taylor insisted his team had been victims of a World Cup miscarriage of justice on Saturday when Ireland fielder John Mooney held a crucial catch despite indications he had touched the boundary with his foot.
Ireland won the tense Pool B match by five runs after setting Zimbabwe a huge 332-run total to chase and stay in the tournament at Hobart’s Bellerive Oval.
With Zimbabwe needing 32 to win off 20 balls and with four wickets left, Sean Williams, on 96, launched a huge hook off Kevin O’Brien towards deep midwicket where Mooney reached high to grab the ball.
But as he claimed the catch, the big Irishman appeared to slightly touch the boundary cushion with his foot which should have resulted in a six.
As the decision was examined, Williams left the Bellerive Oval pitch and the catch stood.
“You’ve got to take his (Mooney’s) word for it. They zoomed in, and I thought it was pretty clear. But you’ve got to take the fielder’s word,” said Taylor who hit a blistering 121 with 11 fours and four sixes as his team chased what would have been a record score.
Ireland captain William Porterfield tried to downplay the controversy.
“It’s very hard to tell when you’re on the line. I haven’t seen a replay. Whether or not he did or didn’t, it was a great catch,” he said.
The result meant that Zimbabwe, with four defeats and one win, have no hope of making the quarter-finals while Ireland are still in contention after their third win and with two more group games to play this week.Advertisement