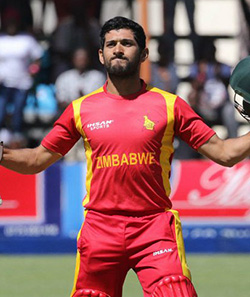 ZIMBABWE folded for 326 after Hamilton Masakadza’s 147 and a handy 80 from Sikandar Raza in the second session of the second Test at the Queens Sports Club on Monday (October 30). Windies openers – Kraigg Brathwaite and Kieran Powell – then saw off 16 overs to polish off 25 from their first target.
Zimbabwe suffered another collapse but a first innings score of 326 gives them a chance to fight and put the visitors under pressure on a dry surface. After Masakadza and Raza scored 90 for the fifth wicket in the first session, Zimbabwe failed to capitalise on the situation and lost three quick wickets to slip to 267 for 7.
The onus was on Raza to take the team past the 100-run mark on the day and maybe closer to 350, but the Windies spinners – Devendra Bishoo and Brathwaite – tightened the noose. However, with the pitch offering significant turn and bounce, the Zimbabwe lower-order failed to grind it out and played frivolous shots to lose their wickets.
Graeme Cremer and Raza arrested the slide with a 43-run stand and frustrated the Windies bowlers. Raza attacked a touch more in the second half to collect quick runs and took the team past the 300-run mark in the 102nd over. With the partnership growing dangerous, Jason Holder took the new ball.
The move worked immediately as Raza was caught at second slip off Shannon Gabriel after a 147-ball stay. Cremer was run out for 11 with the scorecard reading 319 for 9. The innings also saw Bishoo picking up his 100th Test wicket as he became only the fifth Windies spinner to reach the landmark.
Both Powell and Brathwaite then looked at ease with the pacers bowling the first nine overs. Cremer brought himself on in the tenth over to test them with around ten minutes to go for Tea. He got one from Powell to kiss the edge but the ball flew between the ‘keeper and first slip. Other than that instance, the openers did well to ensure they had all their wickets intact.Advertisement