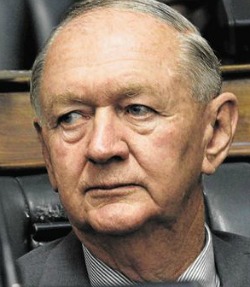 LAST week we looked at the need to deal with the demons of our past and the issues of Citizenship. This week we move onto the fundamental foundations for a modern, developing State. What does an investor want to see before committing resources and making an investment in enterprise of any nature?
The first issue is security; nobody is going to invest time and money in an environment where security is not guaranteed. Security of assets, security of person and staff; this does not mean the simple absence of any threat of violence. It means legal security and a guarantee that no one is going to have the right to interfere with control and management of assets in any form.
In Zimbabwe we have violated every aspect of this essential prerequisite – we have physically forced investors off their land or premises, we have used extra-legal means to strip investors of assets and rights, we have taken money from bank accounts without the knowledge or approval of the people who owned the funds in those accounts.
Our indigenisation initiative, no matter how it is dressed up to make it more acceptable, still says that the State has the right to take over control of your investment at any time and without compensation. The farm invasions have deprived nearly 6000 individuals and companies of their assets and the means to make a living – destroying in the process at least half the value of land and fixed assets in the country.
In addition, when the media is able to show pictures of gangs of thugs threatening physical violence against individuals and staff who resist eviction, even photos of thugs burning down buildings and the police simply standing by and watching, it sends a clear message to everyone, we are not a safe destination for investment.
Those who appeal for help from the authorities – even seeking support for the enforcement of Court orders or Judgments, simply face a blank wall of “we can do nothing, it’s political”. When the Reserve Bank, using its pre-emptive right to buy gold at a market price, does so and then does not pay the producers or delays payment until inflation has destroyed its value, do we need to explain to anyone why investors will not invest in mining activity where they have no control over the sale of the final product.
Then there is the enforcement and respect for contracts of all kinds. A Mining Claim registered with the Ministry of Mines, is a contract. The purchase of a piece of land or a building under freehold title is a contract. The signatures on a guarantee or a bank facility, is a contract and under a system of law, backed by the Constitution, no one should be free to violate such contracts without State protection and enforcement. You try and enforce such contracts where the other party is politically linked in Zimbabwe and soon you will find out that there is no protection or enforcement of contractual rights in Zimbabwe.Advertisement

I can recall one incident where a friend of mine was being forced off his farming business in the lowveld. I heard about the pressure he was under and went to see him. I found him virtually barricaded in his home with all sorts of people stripping the farm of its products and assets. I went down to the citrus orchards where an export crop was waiting to be picked and packed for sale in Europe. The people stripping the farm had a 30 tonne vehicle in the orchard and they were loading it with citrus. I remonstrated with them and they laughed at me. I found a Policeman at the gate and said to him that this was theft. He had a weapon and a clip board; he simply turned away from me without comment. Five days later, my friend shot his dogs and left with a suitcase of clothes. He died destitute in Harare some years later.
The rule of law and equality before the law is fundamental to the creation of an environment where we can attract and exploit investment on a large scale. Until this is restored and respected in Zimbabwe, we are going nowhere.
The next most fundamental aspect must be infrastructure. Not all investments are self-supporting in all aspects – huge mining investments that bring with them the transport and power investments to support the core business are rare. In Zimbabwe we have a basically sound infrastructure, but we have not maintained or invested in this infrastructure.
As a result our railways operate at 10 per cent of their capacity and make a loss and are no longer able to maintain their operations. Our national airline is a joke, despite many years of sound operations and service. Investors are lucky to receive 60 per cent of the power they need – let alone water and a reliable communications network.
Until these issues are addressed, investors will be reluctant to come to Zimbabwe or even to put their own local resources to work in new or expanded operations. In Mozambique we have the spectre of two of the World’s largest companies investing in the huge coal mines in the Tete District – now discovering that they have to make investments in new railway lines and Port capacity to get their products to markets.
In Zimbabwe we need massive investment in our infrastructure – the Railways talk about $2 billion, but who would invest in a Company with their balance sheet and record? You could say the same with Air Zimbabwe and the power utility. But progress is possible, even just using our local resources and our existing contacts. But it requires initiative, enterprise and energy. I was listening the other evening to one of China’s new billionaires – a woman in the construction industry and she said her success was due to her “PhD”. She came from a very poor background, she was always hungry for progress and success and she had supreme determination to succeed.
We have all of those attributes in abundance. I have no doubt that we could put together a plan to turn around the Railways and our national Airline. I have no doubt that we could get at least two multibillion dollar energy investments underway in Zimbabwe today. So what is wrong with us, why are these things not happening? It’s because we want to use the opportunities that are available to further our own interests and not those of the nation at large. Until we are determined to rectify these shortcomings and put our shoulders to the wheel for the national good, we simply will not make progress.
As one leading Indian business person said last week, you have to turn red tape into a red carpet for investors and then progress will take place. I would argue that a red carpet is not enough, at the end of that carpet has to be a secure, safe environment for all who invest in Zimbabwe, one which is fully and efficiently serviced.
Eddie Cross is MDC MP for Bulawayo South. This article first appeared on his website www.eddiecross.africanherd.com