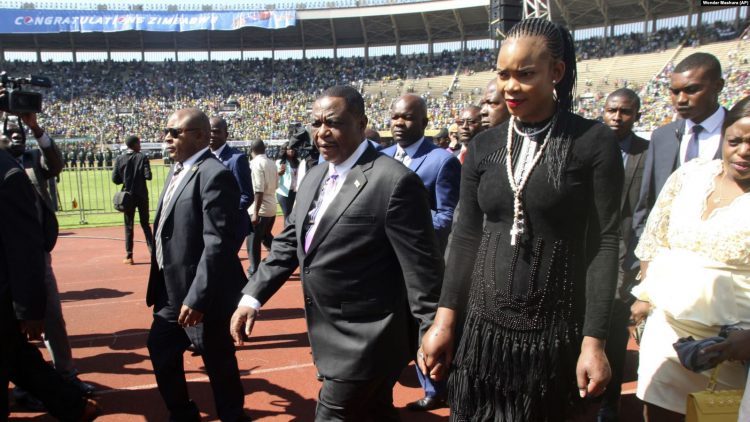 VP Chiwenga and wife, Marry on arrival for the inauguration ceremony of President Emmerson Mnangagwa, at the National Sports Stadium, Harare in 2018
Spread This News

Zimbabwe is riveted by the explosive charges being made in the divorce of Vice President Constantino Chiwenga and his wife Marry.

A glimpse of the luxurious lives of Zimbabwe’s ruling elite, as the rest of the country grapples with economic collapse, hyperinflation and hunger, is emerging in the divorce papers filed in court.

Chiwenga, who as Commander of the Zimbabwe Defense Forces led a coup against former president Robert Mugabe in 2017, is seeking to divorce his wife, a former model, and gain custody of their three children. His wife is also facing charges of trying to kill him when he was in a South African hospital last year.

“Marrying her was the worst mistake I made,” said Chiwenga in court papers lodged this week. He accused her of using “cunning behavior” to “secure a place in my life” and claimed she used “black magic” and was an abusive and violent “addict” who could not be trusted to take care of their children.

“I took them on holiday abroad and initially they had signs of trauma as they explained the black magic rituals they were subjected to … The various tools of trade by the witchdoctors, which were unexpectedly left behind by the applicant (Marry) after a her arrest, told a horror story,” said Chiwenga.

Chiwenga spent four months in China for medical treatment last year and claimed his wife tried to kill him while he was on a hospital bed in South Africa before he was airlifted to the Asian country.

He is also refusing to give her the Mercedes Benz and Lexus vehicles she is demanding, claiming they belong to the government, while one was given to him by a local businessman who has lucrative government contracts.

In her papers, Marry accused Chiwenga of suffering from “acute paranoia brought about by his poor health” and “his being under heavy doses of drugs, including un-prescribed opiates.”

She is demanding close to $50,000 a month for living expenses and to take care of the children, while claiming the vice president had registered his properties locally and abroad in the names of his relatives to circumvent United States sanctions.

Marry is on bail after being charged with attempted murder, fraud and money laundering last year. She said Chiwenga has used soldiers to deny her access to their luxury matrimonial home where she was ordered by the court to reside as part of her bail conditions.