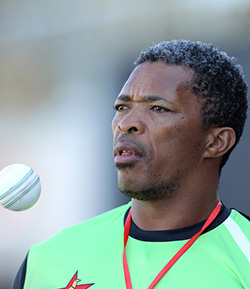 WHILE New Zealand have spent the last two weeks practising patience in anticipation of slow, low conditions in Bulawayo, Zimbabwe cannot wait to get started. They have waited 20 months to play a Test match since visiting Bangladesh at the end of 2014. They have not hosted a Test in almost two years and have not held one in Bulawayo in five. To say they are eager would be an understatement.
“My boys are ready,” Makhaya Ntini, Zimbabwe’s interim head coach said. “I say that because they have been waiting for too long to play Test cricket. This country is a Test country and we don’t have enough of those. They have been waiting for too long to show how hungry they are.”
In preparation, Zimbabwe’s A side had two matches against South Africa A, the hosts lost the second one, and one against the touring New Zealanders, who also defeated them. Their on-field losses were magnified by the personnel problems due to injuries, which have effectively left an inexperienced attack.
Tinashe Panyangara and Tendai Chatara’s injuries have left Zimbabwe’s squad with four other quicks who have two Tests between them. Njabulo Ncube’s came five years ago, against New Zealand, and Donald Tiripano’s against South Africa in August 2014. Taurai Muzarabani and Michael Chinouya are uncapped but have played 61 and 65 first-class matches respectively.
Despite the new faces in his pace pack, Ntini insisted he was “not nervous” about how they will fare against batsmen like Martin Guptill, Kane Williamson and Ross Taylor.
“Me? No, I am not nervous. It’s them that are going on the field. For me, it’s just to motivate them, to show them the way and make them believe. If they get selected, it is a very good chance to show what they are capable of,” Ntini said.
“We are bringing new things in Zimbabwe. Zimbabwe has been one of the countries that has been neglected for quite some time. If they get an opportunity, they will utilise it to their full potential.”
Among the new things is the freedom to express themselves, something Zimbabwean players have previously steered away from as former coach Alan Butcher wrote in his book The Good Murungu, an account of his time in charge. Ntini’s boisterous personality, and famously booming voice, has encouraged everyone around him to follow suit, tell some jokes and just generally have a little more fun.Advertisement

“It’s been good for us to have Makhaya. We were set in our ways for a long time where we didn’t express ourselves. Makhaya, with the way he is, has brought out a few characters in the team which can only be good for us,” Graeme Cremer, Zimbabwe’s newly appointed captain said.
Cremer is hopeful that new attitudes will mean his team can make the mental shifts they need to compete in the longest format on a surface that will test the batsmen initially. “We’re a bit short on game time and we need to make a mindset change, from the white ball to the red ball,” he said. “Bulawayo will be a good batting wicket. Once you get in, you can score a lot of runs but it also a wicket where sometimes it is hard to get in. That first 18 balls you’re not sure on the wicket, because it is probably a bit slower than normal.”
Cremer’s opposite number Williamson will also lead his team out for the first time but has “not thought a huge amount” about the feelings that may stir up. Instead, Williamson has been consumed by tactical preparation for unfamiliar conditions. conditions. His focus has been on finding different ways to be aggressive on a surface that could lend itself to letting the game drift.
“There may not be a huge amount of pace and bounce, so the word ‘attacking’ [could mean something different]. We would like to attack and we’ll certainly try to with bat and ball but at the same time, patience, and how you look to skin it, is the challenge,” Williamson said. “How attacking looks on some of these surfaces, it may not be four slips and two gullies because there might be no point in doing that. It might be looking at how you want to target different areas, where you want to limit scoring. And then if you have an opportunity and you take that wicket, certainly you go all out and try and get another couple. But we know it doesn’t happen too quickly on these sorts of surfaces.”
For Zimbabwe, nothing has happened too quickly in Test-cricket terms for several years. They have long periods of inaction between short series and there is not much they can do to change that although Ntini does have a vision for how they can ensure higher-profile games in other formats. “Every player hates being part of a country that needs to qualify for a bigger stage. My vision is that between now and 2019, Zimbabwe are not in a position to play qualifiers before they play in the bigger set-up,” he said.
Ntini was referring to Zimbabwe’s failure to quality for the main draw of the last World T20 tournaments, and their low ODI ranking which ruled them out of the Champions Trophy. However, should a two-division Test league come to pass, they will also find themselves in the bottom tier and Ntini wants to put them in a position to challenge that, something he knows will take more time than a two-match series against New Zealand. So for now, he just wants them to enjoy something they have waited a long time for.