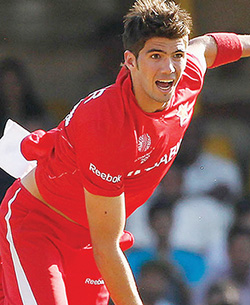 ZIMBABWE’S Harare nightmare is finally over. They lost the Tests against Sri Lanka comprehensively and were equally unconvincing in the tri-series opener that followed. They were beaten by eight wickets by a young Sri Lanka team, and will be desperate for a turn in fortunes.
Now the teams move to Bulawayo, with Zimbabwe hoping that the change in venue brings with it, better luck. West Indies, though, will be hoping for more of the same when the two teams meet on Saturday (November 19) for the third ODI of the tri-series.
Zimbabwe came into the ODI series, a format that they were more comfortable than the Tests, hoping for a better showing. They realised that it won’t come easy, as Sri Lanka had them bowled out for 154, before chasing it down in less than half the allotted overs.
Against a more experienced West Indies side, Zimbabwe’s chances are all the more harder. They did have a couple of bright spots in the game against Sri Lanka, with Peter Moor and Graeme Cremer doing well with the bat. They will, however, want to top order to show more fight and put up a total that their bowlers can at least fight to defend.
West Indies, too, will want their top-order to perform better. Johnson Charles, Kraigg Brathwaite and Evin Lewis all fell relatively cheaply in their game against Sri Lanka, but the likes of Shai Hope and Jonathan Carter bailed them out in their win against Sri Lanka.
With the ball, they were much more efficient as Shannon Gabriel and Ashley Nurse ran through with three wickets. A similar effort with bat and ball should see them through against the hosts.
When: Zimbabwe v West Indies, Match 3 – 09:30 AM Local time, 07:30 AM GMT
Where: Queens Sports Club, BulawayoAdvertisement

What to expect: Bulawayo should offer the spinners more purchase and the slower bowlers should dictate the way the game heads. The weather is expected to be bright and sunny.
Team News:
Zimbabwe: With more spin on offer in Bulawayo, Zimbabwe could look at playing an extra spinner.
West Indies: West Indies should be content playing the same XI that defeated Sri Lanka in the last game.
Squads:
Zimbabwe: Graeme Cremer, Brian Chari, Tarisai Musakanda, Carl Mumba, Chris Mpofu, Hamilton Masakadza, Chamu Chibhabha, Craig Ervine, Sean Williams, Peter Moor, Donald Tiripano, Tinashe Panyangara, Sikandar Raza, Tendai Chisoro, Malcolm Waller, Elton Chigumbura
West Indies: Jason Holder(c), Sulieman Benn, Carlos Brathwaite, Kraigg Brathwaite, Darren Bravo, Jonathan Carter, Johnson Charles, Shannon Gabriel, Shai Hope, Evin Lewis, Sunil Narine, Ashley Nurse, Rovman Powell, Shane Dowrich, Miguel Cummins, Jason Mohammed,
What they said:
“Once we keep working hard and once we keep planning and stay disciplined, keep that team spirit up and that camaraderie [we will do well].”
– Roddy Estwick, West Indies bowling coach
Did you know?
– West Indies have won 35 out of the 45 ODIs they’ve played against Zimbabwe. The last time the two sides met in Zimbabwe was back in 2007.
– The last time West Indies won two consecutive ODIs was during World Cup 2015 when they beat beat Pakistan and Zimbabwe in back to back games.
-Craig Ervine will be playing his 50th ODI on Saturday. His average of 35.52 is the best for a Zimbabwe player after 49 ODIs.