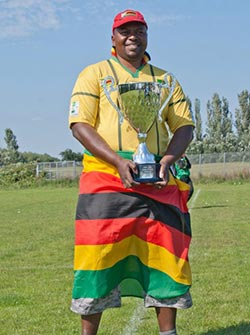 THE Zimbabwe UK Diaspora national team is through to the quarterfinals of the 2014 UK African Nations Cup Tournament which kicked off last weekend in London.
The Warriors top Group A with nine points after beating Uganda and Tanzania with an identical 3-1 scoreline and dismissed neighbours South Africa 2-1 before losing to holders Ghana 2-0 in a dead rubber that was played by fringe players.
Zimbabwe will now face Sierra Leone in the quarterfinals this weekend. The Lone Stars made it to the finals last year which they narrowly lost to Ghana.
Tournament director and Team Zimbabwe manager Marshall Gore said the African Nations Cup UK (ANCUK) is one of the biggest community football tournaments in the UK.
It has been running since 2009, attracting thousands of spectators. The tournament is supported by the Football Association (FA) and affiliated to both the London and Essex FA Counties.
Over the years, the event has grown in stature, establishing vital partnerships with various statutory organisations including the Terence Higgins Trust, The Newham Borough Council and Kick It Out, a racism eradication group founded by the English Premier League.
Gore said this year’s competition is sponsored by Ethiopian Airlines, the biggest operating African airline. Winners of the tournament will walk away with a prestigious trophy plus £4000 prize money.
This year’s opening ceremony was graced by his the High Commissioner of Rwanda to the UK William Nkuruziza, Wayne Deller, CEO of the Essex Football County and Mario Mansill Marketing Director of Ethiopian Airlines.
The Zimbabwean team, skippered by former Caps United Midfielder Kelvin Mushabi, went into cruise control from the first game.
They dismissed Uganda emphatically with goals from Brian Ndlovu (2) and Junior Ndlovu (1) son of Zimbabwe legend Madinda Ndlovu.

Veteran Ware FC goalkeeper Obey Murefu, formerly of Harare giants Dynamos, was at his best, saving a first half penalty which denied Uganda an equaliser. Although Uganda had a lot of possession, Zimbabwe played a quick counter attack game which troubled the East Africans all the time.
The tie against Tanzania was closely contested as the Taifa  Stars needed a win after losing their first game against Ghana.
In a bid to freshen up the team, the Zimbabwe coach Thabang Nare made some brave changes. He gambled and played youngster Junior Kelvin Mutumbi who rewarded him by scoring two beautiful goals, one a curling short from outside the box.Advertisement

Brian Ndlovu, young brother to former Warriors captain Peter Ndlovu, came in as a second half substitute and scored the killer goal – his third in the tournament. The gangling striker has improved this year following a poor show in last year’s tournament.  Second choice goalkeeper Tasiwa Nyambiya also looked composed in goal.
The game against South Africa was crucial for the Warriors; they knew that a win would take them through to the next round.  As for the South Africans, they came into the tie with confidence after beating holders Ghana in their opening match.
The game kicked off at a pulsating pace with both teams searching for an early opener. Zimbabwe took the lead midway in the first half when the skilful Maxwell Dube “Marhino” sent through Muzzy Nduna with a chick back heal. The Coventry United FC striker responded by blasting the ball into the roof of the net.