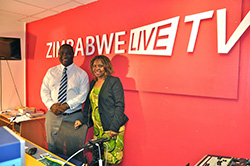 THE annual Zimbabwe International Women’s Awards ceremony being held in Birmingham on Saturday 3 October 2015 will be streamed live by UK based Zimbo LIVE TV.
This is the second time that the ZIWA Awards are being streamed live after another successful partnership last year.
Zimbo LIVE TV CEO, Sarudzai Chibanda said the team are extremely excited about the upcoming event.
“We’re are extremely excited to be the broadcasting partner of the ZIWA Awards for a second year in a row after a very successful event last year.” Chibanda said.
“This year, more people than ever before will have access to ZIWA’s second anniversary via the live streaming, giving them an opportunity to join in from the comforts of their homes on Saturday.”
“A special thank you to RBM Solicitors who have covered every cost to enable the Live Broadcasting to take place this year,” she added.
The awards ceremony will take place at the upmarket Birmingham Council House Banqueting Suite. They are set to feature respected acts such as Kudzai Max, Nommie, SaySay & SharonRose.
Only in its second year, ZIWA have established themselves as one of the premier awards ceremonies on the Zimbabwean scene.
The LIVE Stream can be watched in HD online, on mobile and on tablet.
Zimbo LIVE TV, a high tech Zimbabwean owned TV Station, will be providing the infrastructure for the Live stream from their Reading Studios in Berkshire.
Those who want to watch can use the following URL: http://www.zimbolive.tv .Advertisement