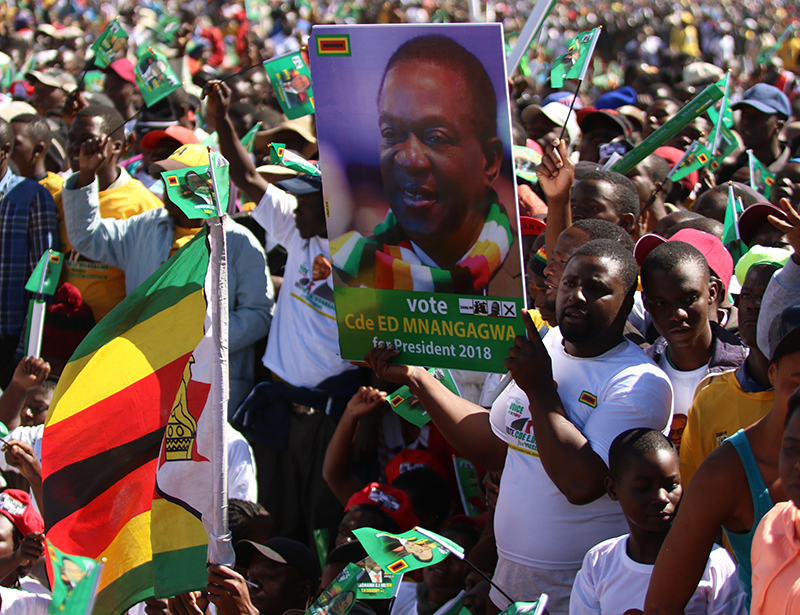 IT’S a week away from make-or-break general elections in Zimbabwe and the two front runners‚ incumbent president Emmerson Mnangagwa‚ 75‚ of Zanu-PF and closest challenger from the MDC Alliance Nelson Chamisa‚ 40‚ are not leaving anything to chance.

While the two were on the road, pictures of them went viral on social media and told interesting stories.

There was one of Chamisa doing push-ups in public – portraying a Rocky Balbao image‚ a people’s champion‚ one that understands politics is not about how hard you hit‚ but how hard you can get hit and still get up.

The other picture showed Mnangagwa‚ who has been on former president Robert Mugabe’s side since 1980 at independence‚ taking medication in public.

For many‚ “The Crocodile”‚ as he has come to be known‚ is a political immortal and the first sign of weakness was captured on camera.

But his spokesperson‚ George Charamba‚ told journalists that his boss has been under the weather while on the road campaigning and the persistent cold spell in the region has not made it any easier.

“There is nothing to picture home about. The Meteorological Services Department has been giving us periodic updates about the chilling weather conditions. Even the president lives under the same weather just like you and me – they are also susceptible to cold. The president is back in form and that is why he is back on his campaign trail‚” Charamba said.

Numerous polls conducted so far give both candidates an edge over the other. For some this close call indicates a possible inclusive government.

“Because the presidential race has tightened considerably‚ there is a very good chance that no party or alliance will be able to achieve a landslide win or to declare a broad electoral mandate‚” said pan-African research institute Afrobarometer.

Chamisa and Mnangagwa are going all out for a winner takes all. Chamisa’s campaign trail has seen him conducting a rally at night in Ngundu‚ a rural area in Masvingo. At one point the stage collapsed under him while he was delivering his address.

Mnangagwa and his deputy‚ Constantino Chiwenga‚ resolved to do separate rallies to cover as much ground as possible‚ to an extent of holding two rallies within an 80 kilometre radius at the same time in Beitbridge a fortnight ago. They even survived a grenade scare that killed two and injured 41 at a rally in Bulawayo last month.

The other 21 presidential hopefuls have been going about their business low key. Some political analysts view them as party spoilers who could eat into the MDC Alliance’s support base.

The likely distant third and fourth in the race‚ Joice Mujuru of the People’s Rainbow Coalition (PRC) and MDC T’s Thokozani Khupe‚ told an independent weekly they could surprise.

“Our chances are excellent and we have tried our level best to campaign given our resource limitations‚” Mujuru said.

Whereas Khupe said: “My chances should not be judged by the number of candidates I am up against. My chances are good because I believe I possess the best leadership qualities that Zimbabwe‚ at this juncture‚ needs.”

Being a high stakes general election‚ numerous observer delegations have arrived in the country but the main fear in the public‚ according to findings by Afrobarometer‚ is that the army might refuse an opposition victory.