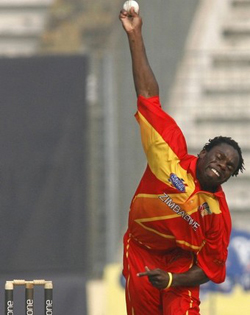 A HIGH-FLYING Afghanistan team was pulled back down on the mat by a clinical performance from the Zimbabweans, as the batsmen floundered chasing a modest target set by Zimbabwe. For the visitors, Hamilton Masakadza and Graeme Cremer scored the bulk of runs; their half-centuries were crucial for Zimbabwe to reach a modest score of 175. Afghanistan, in response to the tricky chase, crumbled to some poor shot selection coupled with some tight bowling from the Zimbabweans. The margin of victory was a huge 117 runs, and the Zimbabweans still trail Afghanistan 1-2 in the 5-match series.
Electing to bat first at the Sharjah Cricket Stadium, the Zimbabweans were left reeling thanks to some excellent bowling from the Afghans. Thanks to a good tactical move from Nabi to start the bowling with a combination of spin and seam, the Zimbabweans were all over the sea against the disciplined Afghan bowlers. Hamza struck in his very first over, misjudging the delivery. Zadran got another wicket in the very next over, hurrying the batsman with some extra pace and bounce.
Following that, an 8-over period ensured some stability for the visitors. But that was just the calm before the storm. The Zimbabwean’s were left exposed by some decent spin bowling and some poor shot selection from their batsmen. While Mirwais used his variations intelligently to snaffle Chigumbura and Raza, Nabi removed Mutumbami an over earlier. A run-out did not help the matters for the visitors either. Zimbabwe were now truly in trouble, with the scoreline reading 49 for the loss of 7 wickets.
The Afghanistan, right from the start, were complacent with their batting strategy. Too confident about chasing down the target, they failed to get settled on a topsy-turvy pitch. And as a blessing for the Zimbabweans, Madziva struck twice in the first over, reducing Afghanistan to 0-2. Incidentally, this is the first time ever that both the teams have lost 2 wickets with the scoreline reading null.
Afghanistan, thereafter, were like a headless chicken. Without any proper stratagem, the team looked disjointed even while chasing this partly target. While Neville’s first over was exceptionally good, the rest of the wickets fell to poor shot selection from the Afghans. Their hero Shahzad never really got going, he perished trying to play one shot too many. After Shahzad’s departure, none of the batsmen managed to cross the double figures.Advertisement

Jongwe’s introduction crushed any chance for a fightback from the Afghans. With slight help from the conditions, he crushed the Afghanistan lower order, claiming a 5-fer and the hosts were bowled out for 58. Luke Jongwe’s figures of 5 wickets for 6 runs is one of the cheapest 5-fers of all times, and Afghanistan’s 16 over misery is 5th shortest innings of all time in terms of number of balls.
The match showed that the series was far from over. While Zimbabwe now have a chance to make a comeback, the Afghanistan team were given a stern reality check. The next encounter promises to be a cracker.
Brief Scores
Zimbabwe – 175/10 48.3 overs (Masakadza 83, Cremer 58; Mirwais 3-20)
Afghanistan – 58/10 all out in 16.1 overs (Shahzad 31, Zadran 7; Jongwe 5-6)
Man of the match: Hamilton Masakadza (Zimbabwe)