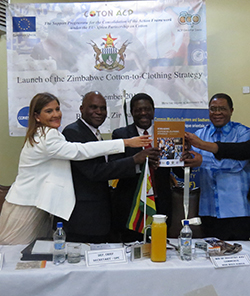 ZIMBABWE’S Cotton-to-Clothing Export Strategy was on launched last Friday with a view to boosting productivity and helping generate much-needed foreign currency for the country.
The scheme was launched at the 5th Clothing Indaba trade fair in Bulawayo by industry minister Mike Bimha.
The event was also attended by the Deputy Executive Director of the International Trade Centre (ITC) and Secretary-General of the Common Market for Eastern and Southern Africa (COMESA) Sindiso Ngwenya.
“Given the abundance of quality natural fibre cotton as well as highly skilled manpower in Zimbabwe, I believe that implementation of this strategy will bear the necessary rewards in terms of not only generating the much needed foreign currency but repositioning Zimbabwe as a global competitor,”’ said Bimha.
Aligned with the Eastern and Southern Africa (ESA) region’s strategic goals, Zimbabwe’s strategy sets out a roadmap to help the country regain its leadership in quality and value addition in the Cotton-to-Clothing sector.
Dorothy Tembo, Deputy Executive Director of ITC, highlighted the importance of the ITC-facilitated Sector Development and Export Strategy for Zimbabwe, which builds on COMESA’s regional Cotton-to-Clothing strategy facilitated by ITC in 2009.
“The sector’s potential for broad-based economic growth as well as for value addition extends beyond Zimbabwe’s borders.
“It is, moreover, equally important for the region, which can only benefit from Zimbabwe’s economic recovery,” Tembo told a gathering of more than 200 stakeholders from Zimbabwe and the ESA region.

The Cotton-to-Clothing sector extends from smallholder farming, which contributes to the livelihoods of more than one million Zimbabweans, to capital-intensive sub-sectors such as spinning and textiles that have played an integral role in the country’s industrialization and to the clothing industry.
The sector also has important food-security implications – cotton by-products can be utilized as animal feed, while cottonseed oil is used for human consumption.
More than 100 stakeholders from the Cotton-to-Clothing sector, including representatives of the public sector, rural communities, small and medium-sized enterprises and civil society, were involved in defining a series of market-led development priorities to support the Strategy.Advertisement

It identifies key markets in Africa, Asia and Europe where the value, diversity and attractiveness of ‘Made in Zimbabwe’ products have not yet been tapped.
The ambitious targets that stakeholders have negotiated include a 71 percent increase in yields to the benefit of some 250,000 smallholder farmers, and an increase in yearly seed-cotton production to 450,000 tons, as well as a target for exports of textiles and garments to reach US$ 110 million by 2019, when the Strategy’s implementation is expected to be completed.
With the launch of the strategy, focus shifts to implementation, and international and regional development partners have already expressed interest in financing and supporting activities elaborated in the Strategy’s Plans of Action.
In addition, ITC will continue to extend its technical assistance during the implementation phase.
“Successful implementation will help the sector to once again become a major driver of broad-based economic growth in Zimbabwe,” said Tembo.
“This would also help ensure that the Cotton-to-Clothing value chain of the sub region will be better placed to foster regional integration and economies of scale.”
Developed by Zimbabwe’s Ministry of Industry and Commerce, with the support of ITC, the strategy was funded by the European Union (EU) under the EU-Africa Partnership on Cotton, and the African, Caribbean and Pacific Group of States (ACP).