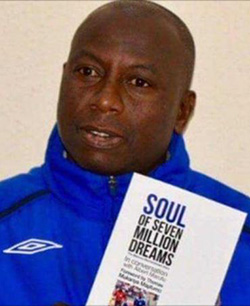 DOES the use of juju, voodoo or witchcraft help teams to win football matches?
It is a question that has been around as long as football has been played on the continent.
Stories abound of charms, amulets, and even animals buried in the vicinity of stadiums in order to bring success on the pitch.
Clubs often resort to using undesignated entry points to the stadium in an effort to avoid being “bewitched” by the opposition.
Even a stray bird perched on top of a goalpost before a game can set the tongues of juju believers wagging.
In Zimbabwe, there have been claims and counter-claims but the use of juju has largely remained shrouded in secrecy.
Until now.
One of Zimbabwe’s most revered players has lifted the lid on the practice during his time at the country’s biggest football club, Dynamos.
Memory Mucherahohwa, who led Dynamos to the 1998 African Champions League final, has revealed a world of bizarre rituals, spells and charms to enhance the team’s fortunes on the field.
In his autobiography, Soul of Seven Million Dreams, the 49-year-old former Zimbabwe international said belief in juju was so deep that it got in the way of technical strategy and negatively affected performances.
“Every week before a game the team would consult a traditional healer. I, as the team captain, would be the one to execute whatever the sangoma (juju-man) had said. Whether it actually aided us, I do not know,” Mucherahohwa writes.
“The team believed more in juju than players’ ability. We believed in collective use of the juju and consulted one traditional healer as a team.
“In most cases we had the team’s traditional healers who were on the team’s payroll.
“The belief was so high at the club that coach [Peter] Nyama lost his job in 1990 after being fingered by a traditional healer as being guilty of jinxing the team.”
Mucherahohwa, who retired in 2001 after captaining Dynamos for eight years, also describes an incident in which a juju-man slit the players’ toes in order to administer his “medicine” and asked the team to play through the pain.
“The cuts were so deep and our toes were in pain throughout the match.
“The pain was made worse by the fact that we drew the match 1-1 [against Canon Yaoundé of Cameroon] to bow of the competition [ 1987 Africa Cup of Champions].Advertisement