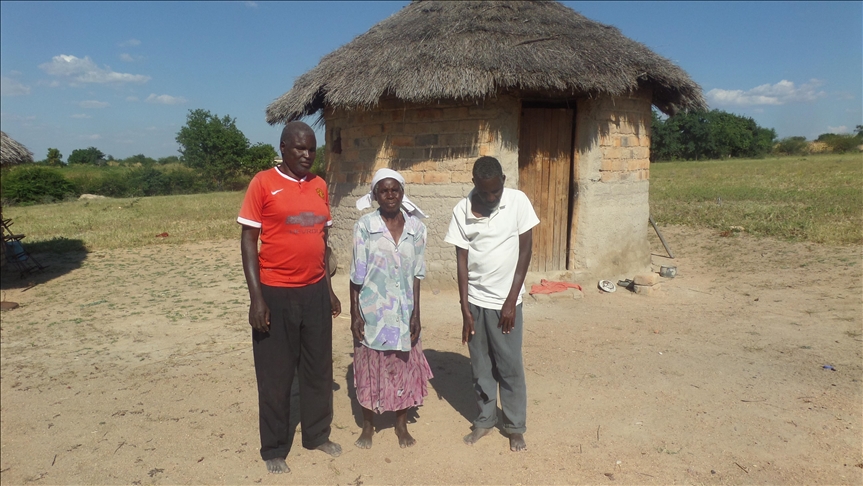 Gokwe: One after the other, AIDS killed three of her children, leaving 81-year-old Maritina Nyoni single-handedly caring for her two blind sons.

A resident of Gokwe South’s Chisina village in Ward 25 in Zimbabwe’s Midlands Province, Maritina said she has known no joy since she lost two sons and a daughter to AIDS.

Maritina’s home, consisting of four thatched huts built using homemade bricks, stands out facing a family cemetery — a grim reminder of how AIDS robbed the family of its breadwinners.

In 2019, Zimbabwe adopted the ambitious Joint UN Program on HIV and AIDS (UNAIDS) Fast Track strategy for ending the AIDS epidemic by 2030.

“Since my husband died, I have stayed single, looking after my blind sons,” Maritina told Anadolu Agency.

In the midst of the family cemetery at her home, Maritina Nyoni stands out, with these graves a grim reminder of how AIDS massacred her three children, leaving her with her blind sons.

But, poverty has not spared the family either.

“I wish their home could be renovated and they receive help in food and clothes. Their crumbling home is falling apart,” said their 61-year-old relative Philip Sibanda.

Despite having his own family to support, Sibanda told Anadolu Agency that he often helps Maritina.

Tawanda Karikoga, a local parliamentarian, claimed the aged widow and her blind sons “receive 50kgs of maize every month.”

“Now, life with our mother is hard. Life was better during the time my siblings were alive. They were so passionate about farming. After they died, life for us took a difficult turn,” Onisimo told Anadolu Agency.

Their brother, Crispen Chinokoro, was the first to die of AIDS in February 2003 at the age of 35. Crispen’s wife and two sons were also not spared by the disease.

The deadly disease continued to claim lives, killing Maritina’s only daughter Elizabeth in December 2003 at the age of 33, leaving behind three children.

Four years later, AIDS struck Maritina’s family again, killing her second son Joshua in August 2007 at the age of 44, and his wife later.

Widowed over three decades ago, with all her able-bodied children gone, Maritina bewails the grinding poverty that has now cornered her and her remaining sons.

“My standard of living fell after my children died. My children were cotton farmers and they would support me, showering me with gifts and money. Life was good,” Maritina recalled.

The COVID-19 pandemic has meant even more woes for Maritina’s family.

“Well-wishers used to come here with food and other things that helped us, but with the coronavirus, many are now restricted and therefore unable to come with help,” said Maritina.

Gokwe villagers, like 61-year-old Loice Dzivakwi domiciled in Mavhulele village under Chief Chisina, said she has also been restricted by the coronavirus from supporting Maritina’s family.

“COVID-19 has limited our social movements to reach out with basic help to Mrs. Chinokoro and her blind sons,” Dzivakwi told Anadolu Agency.

Joseph Sibanda, 29, and another relative of the Chinokoro family, works as a diesel plant fitter at a company in the Zimbabwean capital Harare. He blames coronavirus for the mounting poverty pounding Maritina’s family.

“COVID-19 came with a lot of economic challenges that changed social life. People are restricted from moving around. My father had to sell cattle to support his family and granny Maritina. COVID-19 affected the cattle business amid restrictions on people’s movement,” Joseph told Anadolu Agency.

“This meant my father was under pressure to earn his own living while supporting granny and her sons,” said Joseph.

The pandemic has also prevented Tawanda Karikoga, the legislator of the area, from giving out help to the needy like Maritina in his constituency.

“Last year before COVID-19 struck, l used to run programs targeting people in situations like hers. I’ve visited such families and, in some instances, built better shelters for them. I’m not sure if the counselor here knows the family. Issues like these are usually known to us in no time,” said Karikoga.

So far, the coronavirus has killed over 1,500 Zimbabweans, with cases numbering above 37,000.

According to UNAIDS, Zimbabwe has one of the highest HIV prevalence in sub-Saharan Africa at 12.8%, with 1.4 million people living with HIV in 2019.

What causes the dreaded disease and how to prevent it? The alarming number of cases in the landlocked country in Southern Africa shows there is a lack of awareness among the vulnerable people about the disease.

According to Hilton Chinhava, a Zimbabwean HIV/AIDS activist, “engaging in unprotected sex with multiple sexual partners has remained the main cause of AIDS in Zimbabwe.”

Despite losing his brothers and sister to AIDS, Onisimo said he did not have a clear understanding of what really ailed them.

“I used to see them in their sickness coughing. I thought it was just some ordinary cough. I knew that AIDS is there, but I wouldn’t understand how it kills people,” said Onisimo.