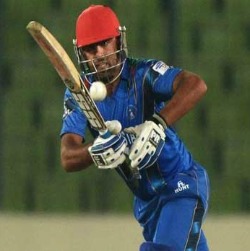 Zimbabwe Under-19s – 216 for 9 in 50 overs (William Mashinge 66, Ryan Murray 53; Zia-ur-Rehman 3/33, Muslim Musa 3/38)
Afghanistan Under-19s – 218 for 5 in 46.5 overs (Tariq Stanikzai 106*, Rashid Khan 55*; Jeremy Ives 2/36, Brandon Mavuta 1/37)
Afghanistan Under-19s won by five wickets (with 19 balls remaining)
ZIMBABWE Under-19s have gone down to Afghanistan Under-19s by five wickets in the ICC Under-19 Cricket World Cup 2016 plate championship final played today at Sheik Kamal International Cricket Stadium Academy Ground in Bangladesh’s port town of Cox’s Bazar.
Tariq Stanikzai struck an unbeaten 106 that belied his 16 years of age to bundle Afghanistan over the line, with Rashid Khan also chipping in with an unbeaten 55.
The pair’s composed performances glossed over a shaky chase that saw the Associate side huffing and puffing to eventually eclipse the 217 winning target with 19 balls to spare.
By their 31st over, Afghanistan were tottering at 123 for five, but Stanikzai and Khan steadied the innings and stood firm all the way to victory.
Jeremy Ives was the pick of the Zimbabwe bowlers as he grabbed two wickets, while the trio of Rugare Magarira, Kundai Matigimu and captain Brandon Mavuta each claimed a single scalp.
It was always going to be tough for Zimbabwe – who won the toss and elected to bat first – to defend a total for which they had to dig deep to put together after losing their opening pair of Shaun Snyder and Brendan Sly, both for nothing, within the first three overs.
Down to 85 for five wickets after 18.1 overs following the dismissals of Ives (eight), Mavuta (12) and Ryan Murray who had contributed a massive 53 runs to the total at that stage, Zimbabwe probably feared an ignominious end to what has otherwise been an inspiring campaign in Bangladesh was looming.
Number-six batsman William Mashinge, however, anchored a remarkable recovery with a 66-run knock that eventually took their total to 216 for nine wickets in 50 overs.
Adam Keefe chipped in with 38, while Wesley Madhevere’s 19 was the only other notable contribution with the bat from Stephen Mangongo’s charges.
Zia-ur-Rehman and Muslim Musa were the chief architects of Zimbabwe’s agony as the Afghan duo claimed three wickets apiece.Advertisement

Winning the plate final means Afghanistan have ended their ICC Under-19 Cricket World Cup 2016 campaign at number nine, with Zimbabwe settling for a 10th place finish.