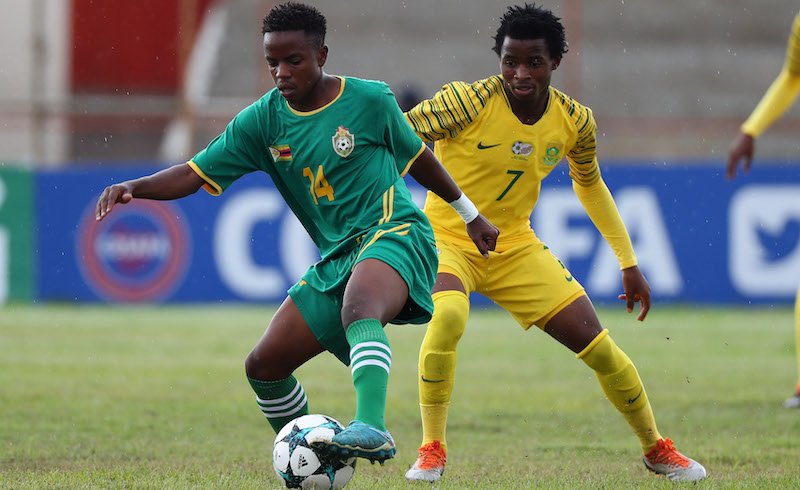 The Young Warriors were playing in their first final at the tournament in eleven years, and the match ended 1-1 at full-time.

Coach Bekithemba Ndlovu fielded an unchanged first XI from that which beat Zambia in the semifinals.

South Africa dominated from the start of the game, forcing their opponents to play deep for the rest of the first half. Captain Andrew Mbeba who played as part of the back four was the most visible player in Zimbabwe team as he also created some opportunities on goal.

Amajita continued to pile more pressure in the second half with AS Monaco dangerman Lyle Foster almost finding the breakthrough on the hour, only for his shot to miss the target by inches.

But it was Zimbabwe who drew first blood against the flow of play when Delic Murimba sent Zimbabwe into the lead four minutes later.

However, they suffered a setback when goalkeeper Tinotenda Ali was subbed off after going down untouched inside his 16-yard box with ten minutes left on the clock. A few moments later, substitute Frank Kuchineyi spilt his first save which was tapped in by Thabiso Monyane, but luckily, the goal was ruled out for an offside.

Nonetheless, South Africa went on to equalise on minute 85 through Foster to force the game into penalties.

Both teams converted their first two kicks with Mbeba and Tatenda Tumba on target for the Young Warriors. Leonard Jani missed the third shot, but it remained level after Foster also failed to score his.

South Africa got another advantage when Clive Rupiya was denied in Zimbabwe’s last kick while they converted theirs to end the shootout 4-3 in their favour.

Meanwhile, Ali won the Golden Glove award while Murimba was the joint winner of the Golden Boot award together with Foster, both on five goals.

Promise Mkhuma (S.A) was named Player of the tournament. fffffff