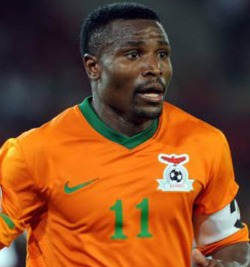 ZAMBIAN veteran striker Isaac Chansa scored the only goal of the match against wasteful neighbours Zimbabwe to help his side to a slender victory in a Group D African Nations Championship opener on Tuesday.
Chansa – who lifted the 2012 African Cup of Nations with Zambia- connected a pass from the left by fellow veteran- skipper Chris Katongo to beat a badly exposed goalkeeper Bernard Donovan after 59 minutes.
Katongo, 33, guided Zambia to the Nations Cup trophy against Ivory Coast in 2012 and on Sunday he defied his age as he covered every blade of the grass. He was the architect of the victory and could have thrust Chipolopolo ahead three minutes into the match after bursting into the danger zone but his effort somehow sailed over the bar.
Yet it was the Warriors who showed a lot of verve and vim in the first half in which they carved out good chances only to be let down by poor finishing.
Ronald “Rooney Chitiyo unleashed a powerful shot moments later which the goalkeeper did well to palm away as Zimbabwe appeared the hungrier side.
Warriors striker, Knox Mutizwa, also missed a headed opportunity later on.
But it was Edmore Chirambadare who missed what could be a strong contender for the Miss of the Tournament, directing his effort wide of the post with the goalkeeper to beat after he was set up by Mutizwa.
But the Warriors played second fiddle to their opponents in the second half. They were always second to the ball which allowed Zambia to boss them in midfield. But Chitiyo had his effort cleared from the line at the start of the second half.
Zambia only managed to take their first corner of the match on 51 minutes as they pressed for the much needed goal.
Chipolopolo forward Mwelwa Mwape also watched his brilliant free kick moments later missing the target by a few inches.
Zambia continued with their dominance and it was a question of when rather than if they would score. The goal did come on 59 minutes through Chansa who summoned his experience to bury the ball home with the defence guilty of ball watching.
Desperate to find the equaliser, Warriors coach Calisto Pasuwa pulled out midfielder Gerald Takwara replacing him with Rodreck Mutuma but that failed to pay dividents as Chirambadare missed another opportunity, directing his effort wide on 72 minutes.Advertisement

Pasuwa also threw in Marshall Mudehwe on 80 minutes for Chirambadare but Zambia held on to the slender lead until the final whistle.