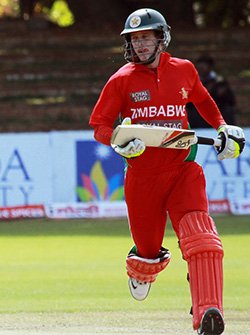 ZIMBABWE have made four changes to their One-Day International squad for the three-match series at home to India starting on Friday, including a return for Malcolm Waller.
The 30-year-old was left out of the World Cup earlier in the year, but returns as a middle-order hitter and occasional off-spin bowler.
Other players recalled are seam bowler Donald Tiripano, all-rounder Neville Madziva and wicketkeeper Regis Chakabva.
“In terms of balance, we have opted for nine batters, four seamers and two specialist spinners and our objective is to try and win the series.
“India has picked a strong side and we are taking them seriously,” outgoing convener of selectors Givemore Makoni said in a press release from Zimbabwe Cricket on Wednesday.
With a slightly smaller squad for the home series, the five players dropped from the 16-man selection that toured Pakistan in May are Charles Coventry, Craig Ervine, Roy Kaia, Tawanda Mupariwa and Christopher Mpofu.
“Mpofu and Kaia will be considered for the next matches in the series and Charles Coventry is in the mix for the Twenty20 series. Ervine is still nursing a hamstring injury,” Makoni added.
After Friday’s opening match in Harare, the teams will play again on Sunday and next Tuesday at the same venue.
The teams will also play a two-match Twenty20 series starting July 17, with the second game two days later.

Touring party … The Indian players on arrival in Harare this week