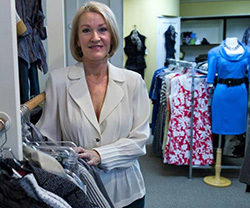 ZIMBABWE native Renee Fahad started selling clothes out of her home in the Pocket area of Sacramento two years ago, but when she discovered that clothier Robin Ritts was closing her Robin Lyle boutique near the Capitol after 29 years of business, Fahad knew she had to have that space.
Fahad’s Zuva Boutique opened on July 1.
On the day that Fahad met with me, she wore a figure-fitting black dress, its V-shaped bodice bursting with floral color.
The sunglasses sitting on her head were Gucci, and her black patent leather handbag was peppered with designer Louis Vuitton’s initials.
She laughed at herself when the conversation turned to her designer tastes, shaking her head as she told me: “If I love something, I’m going to get it.
“I worked. I earned. I always had my own money. … Some things, I may wait, but other things, I can’t deprive myself. I go ahead and get them.”
Despite her personal shopping philosophy, Fahad maintains a well-stocked sale rack at Zuva.
Indeed, she has had to make every penny count in the past, growing up in a family of eight children with a father who was a school principal and a mother who was a full-time homemaker.
As she and her three older siblings reached adulthood, each of them found jobs.
When they got paid, Fahad said, they brought their cheques home to their mother, who redistributed all the funds to pay the necessities and to ensure family members had their own income.
It’s a concept that will be familiar to many immigrant Americans from developing countries but one that is foreign to many native-born U.S. citizens.
Asked about this practice, sociology professor Manuel Barajas of Sacramento State told me that he believes it largely emerged in impoverished regions of the world because families are forced to work as a unit to survive.
“The practice of pooling resources may reflect not necessarily national cultures, but global realities of unequal power relationships where … European colonialism … subordinated indigenous people,” Barajas said. “(They) remain largely at the bottom of the racial-ethnic hierarchies within their nations.”
You also will find this type of collective economics in countries devastated by the world wars, Barajas said, while in the United States and Australia, people often express more individualistic viewpoints, that notion of lifting yourself by your own bootstraps.Advertisement

Fahad said by working together, her siblings and parents were able to ensure that everyone had a measure of success.
Fahad’s twin brother, Ron Smith, became a professional golfer, for instance, while her little sister Karen Mutasa is a partner in a cosmetic distribution company that has the license to distribute such brands as Clarins, Dior and Givenchy in Zimbabwe.
Mutasa’s husband, multimillionaire Shingai Mutasa, developed Zimbabwe’s premier shopping mall and office building, Joina City.
Fahad was working as a supervisor in a computer-repair shop when she met her husband, the late Faissal Fahad, a native Sacramentan who was an international business attorney. They married and lived for many years between San Francisco and Harare, Zimbabwe.
When he died in 2004, Fahad was left with three young children to raise in a country where she had few friends, but she met people through her children’s elementary school.
She and her husband were fortunate enough to have investments that allowed her to remain primarily a homemaker for most of her children’s lives.
Now 51, she wants to pursue her lifetime interest in fashion by helping women find clothing that makes them feel beautiful.
Her boutique carries suits and dresses for the office, evening attire, jewellery and other accessories, and much more.
She finds her labels – Frank Lyman, Jovani, Mary Francis, among them – at retail trade shows in the United States and in her travels abroad to Africa and elsewhere.
This article was originally published by The Sacramento Bee.