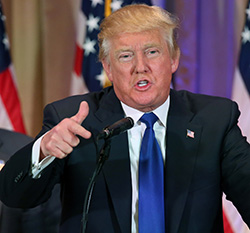 I KNOW exactly what you think and no, it’s not what I mean. Let me clarify, Zimbabwe needs a Trump, meaning its own version of the billionaire real estate mogul. The man claims three times his actual worth due to overvaluing of his brand name, and brand is always tough to price, but nonetheless he is still a very wealthy man. In the following new few paragraphs I will try to not only convince but hope to win you over.
So why do I say this. First it is important to understand that despite having run under a Republican ticket, Donald Trump subscribes to neither the Republican nor Democratic philosophies. In fact, Trump has no ideologies. Having supported Hillary Clinton and many other Democratic candidates in his home New York City constituency for many years past, he’s famously known for having said if he ever ran for office he would do so under a Republican ticket because they are the dumbest group of voters who believe anything.
It’s actually never been proven he ever said that but it only goes to show how he’s perceived. Getting back to parties, the only one Trump subscribes to is “The Benjamins Party” also known as the Greenback. He’ll do anything to promote his brand because it’s the only asset he owns. Most of the hotels he owns are not his, just licensing deals where he leases his brand name. Running and winning the US Presidential election is the biggest deal of his life. Why does he visit Mar-a-Lago estate every weekend ever since he got into office? He knows it is priceless advertising that money can never buy.
The first reason we must elect our own Trump is because we need someone who has run big international business successfully and is familiar with the power corridors of multi-lateral institutions. We need someone with no allegiance to one party; better yet no political affiliation, just someone who knows how to WIN, WIN, WIN.
Politics come with too much obligatory thinking to and entitlement from fellow foot soldiers resulting in a bloated government. Look at Trump’s executive staffing, it’s packed with industry leaders most of whom have contrasting ideologies, none more-so than his Chief Strategist Bannon and Chief of Staff Priebus.
We need a Trump because we need to have a President who can fill up a cabinet with technocrats, people who know how to turn corporations around, not politicians. Zimbabwe has to move away from being bound to choosing a cabinet from Members of Parliament. Those two duties should be mutually exclusive. When does one get the time to effectively run a ministry and also address constituency issues? This point was driven home in a circulating social media video by an aspiring presidential candidate Dr. Manyika.Advertisement

Mugabe has used cabinet posts to curry favour for himself and his agenda, jobs for the boys as they say. The same will happen with Morgan Tsvangirai. If he were audacious enough to create two extra VP post when he’s not yet in power, what do you think will happen once given the keys to the State House?
Don’t get me wrong, I used to be Tsvangirai’s biggest sympathizer/surrogate but he and the whole MDC crew slept on the job in the unity government. He started to enjoy a little too much the 4pm tea with Mugabe and forgot an election was coming. Instead of pushing their agenda over the whole five years Tsvangirai was in government, the enemy started to look too beautiful and forgot it still had fangs to bite.
Tsvangirai is not your solution, the best that can happen is to make him Vice President as consolation for the scars he suffered since he’s been in the trenches. Like in the US Executive branch, the VP’s job will be a liaison between the Executive and Legislative, making sure his party votes in a progressive way. He’ll be an emissary of the Cabinet. Needless to say, we don’t need more that 15 cabinet posts for such a small country.
Zimbabwe needs to start thinking outside the box in coming up with a turn-around strategy for its moribund economy. We can’t follow what has been done elsewhere, at least not everything. This notion of electing a non-party backed President is unheard of yes, but it has a much better chance of success. We know that Zanu PF has no new ideas and will lead us nowhere.
In fact, I support Themba Mliswa’s train of thought expressed during a Ruvheneko Interview where he advanced names of mostly exiled Zimbabweans, who we know are not career politicians. To further cement this point, Phillip Chiyangwa also lamented the loss of Zimbabwe’s heavyweight brains to the diaspora. My painful difference with PC is that he sees the need to remove dictators half a continent away but forgetting the one at home.
I admit, 29 years in power was way too long for Hayatou, but if only Chiyangwa could be consistent. I don’t like that most of his type sing praise for the President while piling blame for the country’s problems on his ministers. If ministers don’t perform yet keep getting recycled for 10, 20, 30 years who is to blame? Shouldn’t it be the man appointing them? Either he is a poor judge of talent or he supports the mismanagement that goes on.
If you ever visited the UAE and went to their museums, one thing that you’ll learn is that Dubai used to have crude oil but the leaders had the foresight to see it would not last forever. So they used oil wealth to build infrastructure that is in place today and supporting a very diverse economy from tourism, to financial and travel hubs.
One might say Singapore and UAE succeeded without democratic governments but they possessed one major advantage which Zimbabwe does not have, visionary leadership. Prime Minister Lee Kuan Yew and Sheik Rashid bin Saeed Al Maktoum transformed their respective countries from Third to First World in a single generation.
Can anyone name one thing ZANU government used diamond revenue for? Now we are told the resource is almost depleted and what do we have to show for it? Instead of using the platinum and uranium resources Zimbabwe possess to advance the welfare of its people, Mugabe uses it as a tool to the West by threatening to supply rogue regimes in the world, namely Iran and Russia. Once again in Trump’s playbook, at least in the nationalist chapter, those resources should be used to attract jobs and investment into the country.
A recently circulated SABC video showed white Zimbabwean farmers who moved to Zambia and are now supplying the whole region with surplus grains in addition to massive herds of cattle. At the end of it, a Zambia Agriculture Minister was very introspective and questioned why boast of a natural resource when you don’t have the capital to invest in it. That was a direct left jab at Zimbabwe, where land has been the alpha and omega of Zimbabwe’s politics but with no capital or the skill-set to produce, it remains just that, dirt.
If anything, the one take away from this article should be that Zimbabwe needs a President independently elected of a political party, who will in turn hand pick a cabinet not affiliated to any party. If technocrats cum politicians like Tendai Biti think they can serve the country better in the Cabinet, they should renounce party affiliation and give up parliamentary seats. The old African model of entering politics to amass wealth should be rejected. We want leadership that enters public office to change lives, after they have worked hard to accumulate wealth.
We see this all the time with Wall Street millionaires who seem to have a Damascus moment after gathering wealth by hook or crook. Juxtapose that with Nigerian governors who all leave office billionaires and you wonder how a country can develop with such moronic pilferage of resources.
Lastly, I encourage each reader to watch this Ruvheneko interview with Chinotimba and make your own conclusion about the seriousness of our policy makers. https://www.youtube.com/watch?v=HQ5QLU7ssEY It’s true when they say you get the leadership you deserve. Zimbabweans are a snobbish type, who expect things to just change without participating in the reform process.