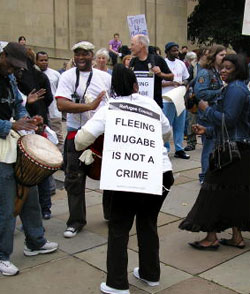 I HAVE a confession to make, I am one of those that went away or, as some would want me to say, ran away. It’s been more than a decade since I left my country, city and family at the height of a protracted decline in the “Zim Situation”, followed by the inevitable consequence; a mass exodus. I followed many, heading into a foreign world with no hint of how things were, let alone how I would fend for myself. What happened next was the breakdown of relationships with family, extended family and my friends and I became unknown to each other.
Fast forward more than a decade later, I have seen how others live, read their history and appreciated the selfless sacrifice their founding fathers made. How the succeeding generations strive to improve where their fathers left off whilst protecting and elevating the legacies they created. The same cannot be said for my beloved country. After the first 15 years from achieving independence, the country began a backward slide in all measures that can be put to index. The founding fathers sought to protect their own legacies by amassing wealth and holding on to power whilst the future generations starved and the productive population left in droves.
Now it’s year 2014 and the homeland has been, of late, laden with revelations of one scandal after another from relationships to ridiculous salaries by government, city and public institution officials. That’s what got me thinking that the country needed new citizens and a revolution of mindsets. But where would these citizens come from and how do you achieve a Revolution of Mindsets? The notion of New Citizens is not me calling out on my fellow “Diasporans” to go back home but it is for those who hold the Zimbabwean citizenship to become one wherever they are resident and bring forth from their experiences only that which improves society into the mix of being a “New Citizen”, home and away.
Lessons can be learnt for Asian countries; they managed to recycle their own into new citizens. It is notable that most government officials and business leaders (who form a second generation of leaders) have been educated and exposed to systems outside of their own countries. They align what they learn and experience from the outside to improving their own ways without losing their sense of belonging. The lesson is that a nation does not have to fully adopt others’ values and methodologies but simply sift out the good parts beneficial to progress and leave the rest. In other words, only emulate the good and adapt them to your own environment without changing it but just improving it.Advertisement

A good example would be the adoption of Western democracy. Some Asian countries accepted democracy to the extreme such that people have voice and power to overthrow governments at will. Some have shunned democracy for reasons that it would not work for them but took some elements of it on a best-fit basis. The result of mixing your own ways with only that which is good from others into the ways economies are managed and decisions are made leads to improved thinking of the current and future generations of leaders. This is followed by a chain reaction of how the society is influenced by a new school of governance, evolving commerce and enterprise in thinking and behaving progressively thereby creating New Citizens.
The delivery of this will require appropriate platforms to allow those outside Zimbabwe to mix well with those in Zimbabwe. This does not only start with governments but the society at large e.g. there is a general feeling of being labeled “Diasporan” each time you are back home as if we are not of the same bloodline. If we stop putting labels and embrace how we benefit from each other we would, impetuously, begin to think progressivel, thereby creating New Citizens.
The revolution of mindsets will somewhat require some divine intervention and until our plethora of self-proclaimed prophets go on bended knees in prayer asking for a much-needed miracle for all Zimbabweans to think the same way; this will remain just as much of a pipe dream as it sounds far-fetched. But it wouldn’t hurt to have a government that understands that even one citizen’s revolution of mind and ideas can uplift a society if it is given a platform to thrive. I won’t name Zimbabwe’s most successful telecoms company as an example; I refuse to be drawn into the obvious.
Only when our founding and succeeding leadership creates a platform for new blood to come into the mix and a society that fully accepts their own, taking pride in their achievements home and abroad shall we ever achieve “New Citizenship” status and gain the bravado to execute revolutionary ideas.
One Love!