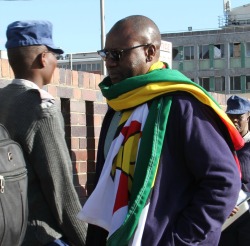 ORGANISATIONS undoubtedly are the most effective vehicles for achieving set goals. Human beings can accomplish much when in organisations; there is vast strength in numbers; the power of synergies.
There is an African saying which goes: “If you want to go fast, go alone, and if you want to go far, go together.” The importance of leadership can never be overemphasized; human beings, since time immemorial, have had structures with leaders, commanders and chiefs, for example.
Charismatic leaders kindle fires in the bellies of followers. They say leadership is making people do what they thought was impossible. Those familiar with the story of Jesus Christ will remember how his disciples, soon after the crucifixion and on the Sunday of the resurrection, suddenly were contemplating going back to fishing. As the book of Luke records, the journey to Emmaus where one disciple speaks to Jesus Christ unknowingly that, “we thought it was he who would redeem Israel”. To the disciples, the death of Jesus doomed them; they were perplexed and thought that they had been duped and that their saviour was no more.
One can draw parallels from the current Zimbabwean situation. Get me well, I am not saying that Pastor Evan Mawarire is Christ! I am just comparing the pain and dejection that comes with losing a leader. Pastor Evan Mawarire, in the last couple of months, had managed to generate so much interest among Zimbabweans especially with regards to their sense of patriotism.
Truth to tell, the national flag had become so much loathed as it was associated with Zanu PF, oppression, corruption, poverty and suffering. Then came pastor Evan and the people started realizing that the flag, on its own, was not the problem, but those who have short charged people in accessing what the flag represents.
ThisFlag movement stirred so much momentum that the Zanu PF government found itself in a fix and probably tempted to ban the flag. Sentiments from Zanu PF apologists like Reason Wafawarova revealed that they were not happy about having Zimbabweans draping themselves with in the flag.
The climax came the day when Mawarire was dragged to court on trumped up charges of inciting violence and plotting to overthrow a constitutionally elected government following the 6 July Zimbabwe shutdown. Pastor Mawarire was given so much unprecedented support that generated global headlines. Many Zimbabweans across the social divide suddenly found each other; the regime came under so much pressure that charges were latterly dropped that evening. There was so much euphoria on the victory over the regime’s shenanigans. We suddenly forgot that we had just won a battle, not the war. We suddenly forgot that the issues which Evan was advocating remained unaddressed. The corruption, injustice, poverty and intimidation suddenly faded from our minds. Some activists who were arrested for their role in the stay away were also forgotten, the eighty six in Bulawayo, those in Harare and those arrested in Beitbridge.Advertisement

Those who tried to remind us not to abandon foot soldiers on the battlefield were labelled as attention seekers or diversionary. Thanks are due to some comrades in Abammeli lawyers for human rights, Zimbabwe lawyers for human rights and the likes Freeman Chari and other individuals who came up with initiatives of raising bail money. The arrested comrades were finally released except for Linda who is still in custody.
The excitement around Mawarire was so immense that had he posted a video pleading with citizens to march to the statehouse, it could have been heeded. Some over excited people soon boldly stated that the pastor was the only man in Zimbabwe. One could imagine the pain other people that have been tortured and imprisoned by this regime in the cause of a free Zimbabwe. Many suddenly chose to forget that the struggle against the Mugabe dictatorship had been going on for ages and indeed the likes of Sten Zvorwadza, Promise Mkhwananzi to mention just a few, and organisations like #Tajamuka and #occppy Africa Unity Square were all precursors of ThisFlag. The revolutionary excitement soon engulfed the atmosphere, people were just waiting for a video telling them what to do next, however things were to turn differently. Mawarire was soon reported to have fled to the US, only for his to confirm being in South Africa.
In the next few days, the world watched in excitement as Mawarire told our story. Every major TV channel in South Africa and the Europe was keen to interview the pastor. He was to meet a number of prominent people and fellow Zimbabweans in South Africa. One can safely say that apart from Zanu PF that felt threatened and the opposition whose limelight was being stolen, everyone wanted to see Mawarire succeeding. However, President Mugabe’s speech at the Heroes’ Acre, which is his traditional podium for addressing crises, was to dampen everything. True to form, Mugabe took the podium to take a swipe at the pastor. Being a dictator that he is, Mugabe hinted on unilaterally withdrawal of Evan Mawarire’s citizenship, thank God, he doesn’t have such powers.
Following Mugabe’s speech, Zanu PF youths marched through Harare sternly warning Mawarire and his followers against causing more protests. Zanu PF threats can’t be easily ignored, these people don’t believe in the rule of law hence it is a noble idea for Mawarire to remain out of the country.
With Mawarire now in the US, there have been mixed reactions; there is a school of thought which views Mawarire’s decision as rational, given Zanu PF’s liking for violence. And yet others feel betrayed; one cannot entirely dismiss this group sentiments: how could Mawarire suddenly abandon such support and go for exile? While those who feel betrayed are mostly people who believe in Messiahship, they generally want others to fight for them while they watch.
The fight against dictatorship can never be easy, it needs strategies and perseverance, and it is a long odious journey. These are facts that we should soberly grapple with, taking care not to end up believing that Zanu PF is invincible.
As a country, we need to learn to major in building strong institutions not individuals. This is the problem that we have seen in the political parties and civil society organisations. There are many brilliant individuals leading very weak institutions, it would be much safer to have weak individuals leading strong institutions.