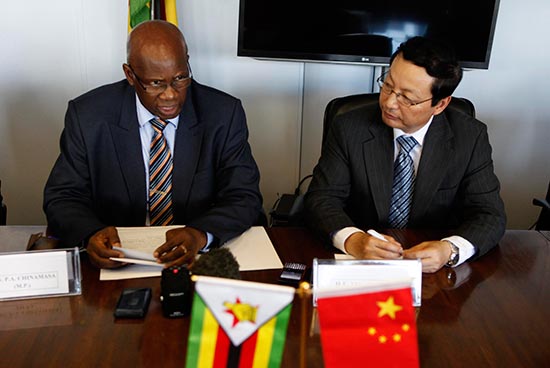 THE arrivals hall Harare international airport is unremarkable – except for the bilingual signage. In a spectacularly ironic nod to the colonisers old and new, you can choose to be directed in either English and Chinese.
At the beginning of the year, the Chinese Yuan was accepted as legal tender and earlier this month, it was announced that trade between Zimbabwe and China had doubled between 2010 and 2013 to $1.1bn.
There’s no doubt it is China’s favourite African country.
Speaking at his farewell reception outgoing Chinese economic and commercial counsellor Han Bing said: “… Zimbabwe ranked number one in the whole of Africa in respect of attracting Chinese Investments.”
The relationship between the two countries has been going on since the bush war of 1979 when Joshua Nkomo was backed by China after the Soviet Union brushed the country off. Since then, China and Zimbabwe have become inseparable.
China’s boom has given it an insatiable need for resources; Zimbabwe’s bust has meant it will do whatever it’s asked for access to a cheque book.
At his party, Bing made no bones about China arranging loans that would be secured by mineral resources.
“It’s just an idea both sides are working on … We will see how many loans can be granted to Zimbabwe,” he said.
China had already handed over more than $1bn in loans for major infrastructure projects such as the Victoria Falls Airport enlargement and the Kariba South Power Station. But those are transactions in the public domain – many appear to be a whole lot murkier.
The Chinese are exempt from the indigenisation laws that force all other foreign investors to give away 51% of their business to carefully selected indigenous Zimbabweans.
In return, they provide support and funding when it is asked for; apparently, with no questions asked.
Before the elections in July last year, Britain’s Daily Mail claimed to have received documents showing that Israeli, Chinese and British companies were behind a carefully constructed plan to keep president Robert Mugabe, in power by ballot rigging, voter intimidation and even “neutralising” voters
It’s unlikely any of this was done because of Mugabe’s charm and humour, so the returns have got to be serious.
It’s not easy to tell what exactly goes on in the Chinese operations because they aren’t listed and management is done by imported Chinese nationals.Advertisement

Nevertheless the rumours are rife: the Marange diamond mines are reportedly riven with human rights abuses and the “blood” diamonds are snapped up by China which has no truck with the Kimberley Process. A purpose built airstrip is suspected to have been built to quietly remove the diamonds out of the country.
But things appear to have moved along, and China is now believed to be constructing military bases in the country.
A German-based website claimed in March that China was in the process of building a cutting edge military base in the Marange fields. The website called it “gunboat diplomacy” and said unnamed military officials and a diplomat had admitted knowing about the base.
China has for years supplied Zimbabwe with military hardware, including MIG jet fighters, tanks, armoured vehicles and rifles.
But speculation now is that China is planning ahead to safeguard its huge and growing interests in Zimbabwe and the rest of Africa.