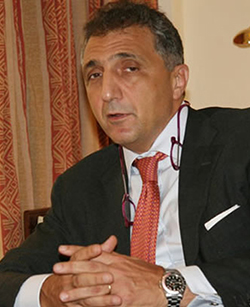 THE International Monetary Fund on Thursday said it could be at least three years before Zimbabwe can start accessing external funding, but Zimbabwe’s finance minister, Patrick Chinamasa says the government will continue to pursue reengagement and to ‘avoid shutting down all avenues to development.’
Domenico Fanizza, who is heading the visiting IMF mission to review Zimbabwe’s progress under the fund’s Staff Monitored Programme (SMP) — an informal agreement between a government and IMF staff to monitor the implementation of its economic reforms — said the country’s environment ‘does not favour quality economic activity’ and has a ‘widespread lack of confidence that reflects the legacy of the hyperinflation period.’
“These issues cannot be solved quickly, there are no quick fixes. Ad hoc approaches do not work. What you need is a comprehensive and medium-term horizon,” he told participants at a roundtable discussion on Zimbabwe’s economic prospects.
“The reforms that are needed are costly and will take time to be felt in the economy and to produce the kind of resources that are needed to support the country.”
The country owes $9 billion in external debt, half of it in arrears, and has not received loans from the IMF, World Bank and African Development Bank since 1999 after defaulting and policy differences between President Robert Mugabe and the West.
Zimbabwe’s economy is also slowing down due to lack of foreign investment, weak commodity prices and the underperformance of key sectors such as agriculture and mining.
Fanizza said Zimbabwe had met all the targets set under the SMP for the period up to June and will next month present plans to international lenders on the sidelines of the IMF and World Bank annual meetings on October 8 in Peru on how it intends to clear the arrears.
The country also has to prove that it can keep fiscal discipline and can implement the kind of reforms and capacity to repay its debt that could gain the support of the international community, he said.
“When this is done, the next step is to build a credible, more ambitious reform programme to tackle the underlying problems of the Zimbabwean economy, which would be a three-year programme under a medium-term horizon and that will possibly be the moment in which financing from financial institutions could happen again,” Fanizza said.Advertisement

“That would allow the country to re-enter the international financial community and would mean much-needed investment and social spending. We believe this is the key to lifting the path of growth for the country.”
Finance minister Chinamasa said Zimbabwe was indebted ‘almost to everybody who has done business with the country’ and that the country risks being caught in a ‘vicious circle if it ignores that reality.’
“I want to reaffirm our commitment as government to reengage our creditors, both multilateral and bilateral and we have thrown in all our energies in doing so. If we don’t, we are shutting all avenues to development,” said Chinamasa.
“The end game of the re-engagement is for us to reach accommodation with creditors in order to clear our arrears get new money and to access capital markets.
“We cannot be isolated for too long, we need to belong to the global economy. The reality of the multi-lateral institutions is that they don’t give you new money if you are in arrears.”