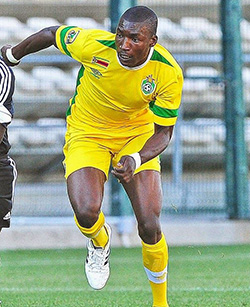 A NEW phenomenon has emerged in Zimbabwean football, with some PSL players trekking up to join the Tanzanian league.
The Tanzanian league is more financial rewarding than the Zimbabwean league and local players are finding it hard to resist offers from those shores.
Most Zimbabwean players are well known to dominate the number of foreign players who ply their trade in South Africa but, Tanzania could soon become the most preferred destination by locals.
After former Dynamos and Warriors midfielder Justice Majabvi joined Simba SC, it appears he paved the way for the ex-FC Platinum duo Donald Ngoma and Tahabani Kamusoko, to look up to Tanzania for greener pastures.
Ngoma and Kamusoko joined Young Africans, both becoming an instant hit while the former has topped the top goal-scorers chats in that country.
At Yanga, as Young Africans are affectionately known, they have now teamed up with former FC Platinum Zambian colleague Obrey CHirwa who signed for the giants last month.
Now, former Warriors captain Method Mwanjali has become the latest player to surface at Young Africans.
AS if that is not enough, Yanga are being strongly linked with FC Platinum midfielder Walter Musona as well as Highlanders utility player Bruce Kangwa who is currently playing arguably the best game of his life that has seen him being an integral member of the Warriors Afcon squad.
Not only players have attracted the attention of Tanzanian clubs. Young Africans were last month ready to prise away coach Callisto Pasuwa from his Warriors contract.
The club’s representatives were in Harare trying to snap up the coach with an salary offer believed to be between US$15 000 and US$25 000 but Zifa president Philip Chiyangwa quickly moved in to ward off Yanga.
On the players’ side, prospects of playing continental football with Yanga or Simba have also been enticing for Zimbabwean players.
That comes with marketing opportunities for players and Donald Ngoma was last month linked with a move to Egyptian giants Al Ahly and Zamalek after scoring against them in a CAF Confederations Cup match.
“Yes (I would be open to a move), sure. Why not? I can’t choose [between them]. Both are big teams in Africa so any one of them is okay,” Ngoma said was quoted as saying by Egyptian publication kingfut.com.
The current trend has exposed Zimbabwean clubs as they lag behind on the continent in remunerating their players.Advertisement