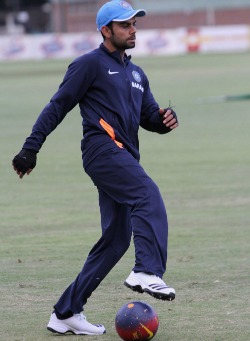 ZIMBABWE coach Andy Waller hopes that his side will surprise India – like they did the last time the South Asians came to Harare – as the two sides face-off in a five-ODI series starting on Wednesday.
The series is Waller’s first international assignment with the Zimbabwe team as the head coach.
“All along we’ve prepared and hoped we might surprise them in one of the games. You’ve got to be realistic, but as long as we’re competitive and do the best we can,” Waller was quoted as saying.
Waller said the boys are excited about the series as it will be a great experience for them.
“Our guys are hugely excited about this. It’s a great experience for them, and we’ve been preparing knowing that the best side in the world are coming. I think the guys are up for it. Hopefully all the hard work we’ve put in in the last nine weeks is going to pay off,” he said.
Waller also revealed that veteran left-arm spinner Ray Price, who is expected to end his career after the series, is part of the Zimbabwe squad.
“Price is in the squad, I don’t know why he wasn’t named in the original list,” said Waller.
Price, 37, has played just one ODI this year and with national contracts up for renewal soon, it looks like it would his farewell series. Price has played 140 ODI games for Zimbabwe since making his debut in 1999.
With some of the top Indian stars missing in action, Waller said Zimbabwe was not considering the squad a depleted one.
“I think they’ve just got so many players,” he said. “With the new guys who’ve come in, I don’t think there’s a huge difference to be honest. We know that they’re all very good cricketers, so we don’t look at it like a weakened attack at all.”
Waller said the Harare Sports Club, where the first three ODIs will be played, will be a paradise for batsmen, unlike the one in Bulawayo, which will host the last two matches.
“We’re not shaken at all. It was quite an interesting wicket [at Country Club], quite a difficult wicket,” he said.
“I think the guys are actually quite positive about it, because they were a damn good bowling side. And I think we know it’s a lot harder batting on the wicket there than it will be at Sports Club.”
Meanwhile, after “hectic” but successful two months of cricket, Indian players said they were looking to play in relaxed mood and have fun in Zimbabwe in the five-match ODI series, captain Virat Kohli said.Advertisement

India have played non-stop cricket in the last two months winning the Champions Trophy in England and a triangular series in the West Indies.
The switch to a more laid-back atmosphere was evident at the team’s first training session with the players having a game of football. They laughed and joked for much of the workout.
Kohli said his young side would play hard but would also have fun at the same time.
“We are happy to be in Zimbabwe and also looking forward to having a good time out here,” Kohli said ahead of Wednesday’s  game at the Harare Sports Club.
“I believe that the games will be competitive. Our squad is a young one but we are out here to have fun,” he added.
Duncan Fletcher, who is in charge of India in his home country, agreed with Kohli and said the tour would be less intense as compared to the gruelling ones in the last two months.
“The past two months have been hectic, too much nerve-wracking stuff happened,” Fletcher said.
“We are looking forward to a less intense tour here. I’m sure fans will enjoy the games,” said 64-year-old Fletcher, who played six ODIs for Zimbabwe in 1983.
While India have reached peak ODI form and won 10 of its last 12 matches, the 10th-ranked Zimbabwe last played a 50-over international in early May.