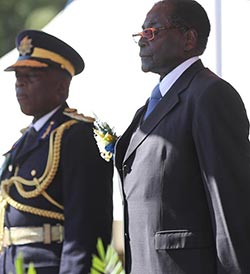 THE present condition of economic and political disrepair in Zimbabwe is not by some angry God up the sky or bad tempered ancestors down below the soil. We are in this hellish condition because of the thinking, decisions and actions of some men and women in the leadership of the country.
Like an abused child, Zimbabwe has been clobbered, raped, sodomised and in many ways violated by those who claim to love her most, and those from whom she expected protection and care. Our polity and economy have produced a social climate that has made beggars out of civil servants and turned resourceful entrepreneurs into vendors, hawkers and peasants in a few weeks. Curious and industrious journalists have been turned into, wanted dead or alive, dissidents. School teachers have been turned into small time willers and dealers who survive on petty corruption. All of us in this proud country, unless if one is politically connected and can extract bribes and rent somewhere, have been produced into second hand people who wear second hand underwear from the East and the West, scavengers of leftovers and droppings from our former colonisers and present imperial overlords from the East, as we are looking East.
In the political corridors, every morning, friends among politicians have to call each other to exchange silly jokes just to confirm if they are still friends since allegiances are changing over the night and the days. The politics of politics that I write about in this article is exactly that, the political, the thinking of how to do politics in such a way that it preserves life and helps enemies to live together rather than expecting that enemies will come to an end.
There is no day in Zimbabwe or elsewhere that we will achieve a world where all of us pray to one God, agree on everything and enjoy what Emmanuel Kant jokingly referred to as the “perpetual peace of the graveyard.” Among the living, perpetual peace is not feasible because of our diverse identities and the scarcity of resources and our competition for them.
As the economy further shrinks and the polity degenerates in Zimbabwe, enmities and conflict will escalate, if left unmediated they might explode into a bloody civil war, and make a big Burundi out of everything. The factionalism that is spectacularly playing itself out in the ruling party and the opposition political groups is present in the civil society organisations, in companies and even sporting clubs, churches and families. Everyone is either a friend or an enemy as the deprived people of the postcolony compete for real and imaginary power. Advertisement