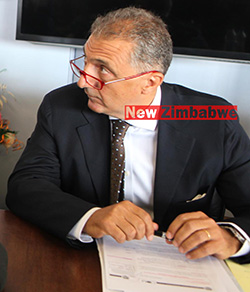 DESPITE commitment to laying the foundation for a sustained strong and private sector-led growth, Zimbabwe remains in debt distress, an International Monetary Fund (IMF) official has revealed.
Speaking Wednesday at a press conference in Harare, the head of the visiting IMF delegation, Domenico Fanizza, said the country’s economic difficulties have intensified this year leading to slower growth.
“Despite the favourable impact of lower oil prices, the external position remains precarious and the country will remain in debt distress,” said Fanizza.
Fanizza however, commended the Zimbabwean authorities for moving forward with reform programmes in spite of the increasing economic and financial difficulties.
The Harare administration has also intensified efforts towards re-engagement with the international financial community as well as addressing the country’s US$9 billion external debt.
“Zimbabwean authorities have developed a proposal for a strategy in resolving the country’s external arrears to the international financial institutions (IFIs), for which they intend to seek support from creditors at a dedicated stakeholders meeting (to be held on the side-lines of this year’s Annual Meetings of the IMF and the World Bank in Lima, Peru).
“Their resolve in this area is commendable,” he said.
Fanizza commended the government’s efforts to strengthen the financial sector and liberalise the labour market though not as expected.
“I am happy Zimbabwe has prepared plans to rationalize public expenditure and reduce public sector employment costs.
“However, these reforms will require time and deeper efforts before their beneficial impact is felt on the economy.
“I am also pleased the authorities met all quantitative targets and structural benchmarks for the second review scheduled for the third review under the SMP,” Fanizza added.
The government has lowered its GDP projection to 1.5 percent from 3.2 percent earlier. Fanizza said the new target was realistic.
“We have looked again at the indicators and yes we agreed on maintaining the 1.5 percent which seems to be cautious and safe,” he said.
“There has been a significant a slowdown in economic activity. There has been a drought which has weighed on the economy activity.”Advertisement

“Moreover, the international environment is becoming increasing difficult with low prices for Zimbabwean exports and those are the main reasons for the downward revision.”
The IMF official said policy reform agenda for the remainder of the SMP includes mitigating the impact of this year’s adverse shocks on the external position and growth, restoring confidence in Zimbabwe’s financial sector, improving the investment climate and garnering support for a strategy to clear arrears with multilateral institutions.
The IMF delegation has been in the country since August 31 to conduct the second review under the 15-month Zimbabwe’s Staff-Monitored Program (SMP).
The mission met with Finance Minister, Patrick Chinamasa, Chief Secretary to the President and Cabinet, Misheck Sibanda, John Mangudya, Governor of the Reserve Bank of Zimbabwe (RBZ), members of the Parliamentary Committee on Finance and Economic Development, other senior government officials, and representatives of the private sector, civil society and development partners.