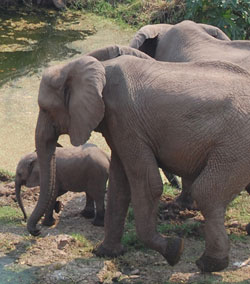 ZIMBABWE raised $1 million from the sale of elephants to China and will continue exporting to the Asian country as part of conservation efforts, wildlife authorities said.
“We exported 24 elephants last year to China and we know that only one died. The rest are still alive,” Edson Chidziya, director general of the Zimbabwe National Parks and Wildlife Authority told lawmakers in Harare on Monday.
The proceeds were used toward conservation programs, he said.
The government will continue to look for markets in the Far East after the U.S. banned trade in trophies and ivory from Zimbabwe and Tanzania, Chidziya said.
In 2015, more than 8,000 incidents of poaching were reported — 175 poachers were captured, 48 of whom were foreigners.
The parks authority has embarked on an anti-poaching program using the security forces, sniffer dogs and drones to track down poachers.
In October, poachers killed 26 elephants using cyanide at two locations within Zimbabwe’s biggest game reserve, Hwange National Park.Advertisement