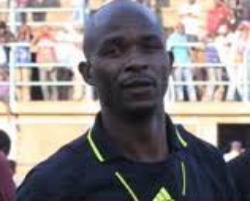 REIGNING Castle Lager Referee of the Year Ruzive Ruzive has been omitted from international assignments after the world soccer governing body Fifa announced the referees and assistants who will be on the panel this year.
ZIFA, through its referees committee, had provided Fifa with a list of nominees whom they considered to have performed better than others.
Each member association is given its own quota of centre referees and assistants based on the level of competition. Zimbabwe got three slots for centre referees as usual with South Africa allocated five, Zambia getting four and Swaziland two.
Three Zimbabwe centre referees Norman Matemera, Nomore Musundire and Philani Ncube, who were on the Fifa panel last year, were retained.
The nominees to be submitted to Fifa are selected based on performance reports from match commissioners and will also have to pass a fitness test.
However, it is the omission of Ruzive that has come as a surprise.
However, Zifa referees committee vice chair Gladmore Muzambi clarified that the nominees are submitted to Fifa by end of September.
“What happens is that the nominees are submitted to Fifa by the end of September and it means what happens in the last two months will not be considered, it will be too late as the list will already be with Fifa.
So Ruzive might have been eligible by September but we already had three Norman Matemera, Nomore Musundire and Philani Ncube who had also done well by that time. The league ends in November after which Ruzive was chosen the Castle Lager Referee of the Year. There is no way this could be reversed,” said Muzambi.
The referees that have been approved by the FIFA Referees Committee for the 2018 international assignments are as below.
Male Referees
Matemera Norman
Musundire Nomore
Ncube Pilan
Male Assistant Referees
Kusosa Thomas
Mhara Luckson
Rumeck Edgar
Nkala Tafadzwa
Nyika Brighton
Ncube Salani
Female Referees
Majo Rusina
Mayimbo Mercy
Nyahuye Thanks
Female Assistant Referees
Simango Claris
Ruvinga Stella
Mloyi FaithAdvertisement