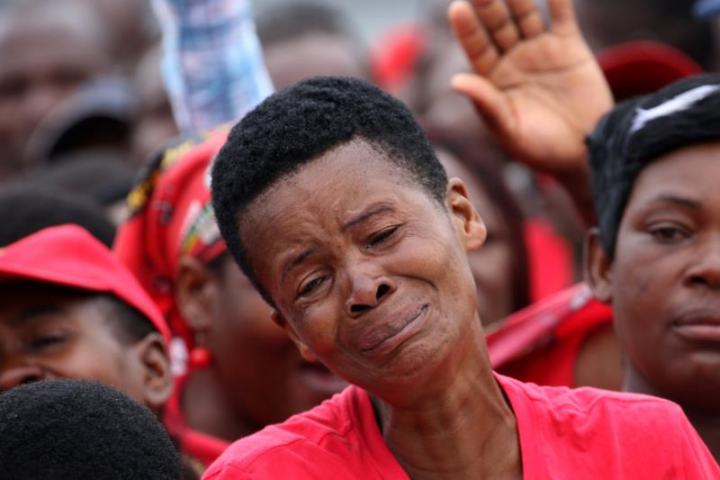 HARARE: Thousands of Zimbabweans and foreign mourners took to the streets of Harare on Monday to pay tribute to s iconic opposition leader Morgan Tsvangirai who died after a battle with cancer.

Supporters wore the trademark red of the Movement for Democratic Change (MDC) party which Tsvangirai led for 19 years in which time it became the main outlet for opposition to former president Robert Mugabe.

Other well-wishers wore portraits of Tsvangirai, flocking to a central square to sing and dance in honour of their fallen leader.

A casket bearing Tsvangirai’s remains was adorned with flowers and driven to the square – named for his arch-rival Mugabe – after the cortege made a brief stop at the MDC’s offices.

As the hearse arrived at the square, most of his supporters wailed, some throwing themselves to the ground while others just watched, tears rolling down their cheeks.

Tsvangirai, the country’s fiercest opponent of Mugabe’s tyrannical 37-year rule, died on Wednesday aged 65 at a hospital in South Africa where he had been undergoing treatment for colon cancer.

“We will not let Tsvangirai down, we will give tribute to Tsvangirai by winning elections in 2018.”

Zimbabwe is due to hold crucial general elections by July and the country’s new president Emmerson Mnangagwa has pledged they will be free, fair and credible – in honour of Tsvangirai.

Tsvangirai became a symbol of resistance to the ruling Zanu-PF’s authoritarianism, entrenched since Zimbabwe broke from its colonial master Britain in 1980.

“Today Africa is saluting a man who has demonstrated resilience, the doyen of democracy in Africa. Morgan Tsvangirai you are our hero, our African hero,” Namibian opposition leader McHenry Venaani told the crowds.

Zambia’s former minister of labour – and best man at Tsvangirai’s wedding – Fackson Shamenda, described him as “a courageous man” who was “beaten (and) mistreated by this government”.

Before being forced into a power-sharing deal with Zanu-PF as prime minister in 2009, Tsvangirai was beaten by police, his rallies were banned and he was charged with treason and jailed.

Tsvangirai pulled out of an election run-off in 2008 following violence which, he said, claimed the lives of at least 200 of his supporters.

He had beaten Mugabe in the first round of presidential elections that year but narrowly fell short of the total required to defeat Mugabe outright, according to the official vote count.

Fungai Nyapopoto, 40, a street vendor who travelled to pay his respects, said: “I am mourning our great hero, a man of the people. It is not easy for us, it is a very difficult time for us. We will always remember him.”

The MDC-T leader will be laid to rest at his Buhera rural home on Tuesday.