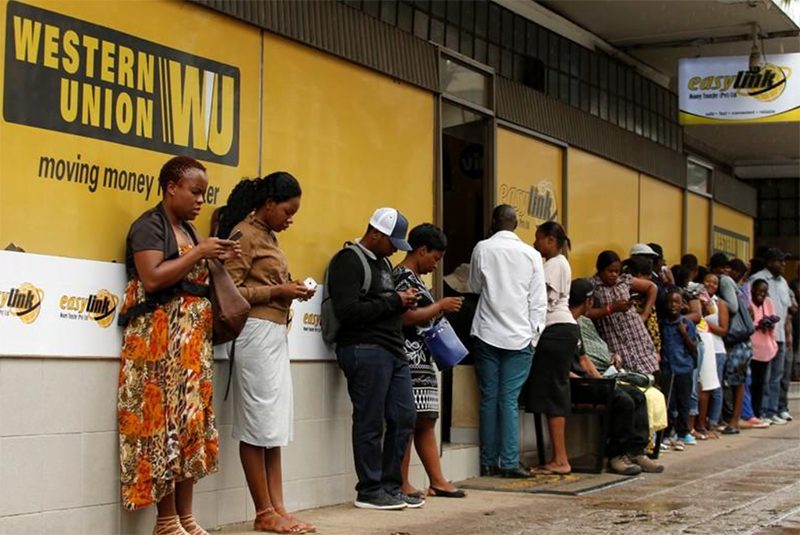 The total number of Zimbabweans – both in and outside the country – remitting money to friends and relatives has dropped although remittance values from expats is on the increase.

This comes at a time local, regional and international economies are facing turbulence amid fears of a global economic recession. Zimbabwe has a total population of 15 million, according to the 2022 census by Zimstats.

New data from the Finscope study by Finmark and the Reserve Bank of Zimbabwe shows that the total number Zimbabweans not remitting money to friends and relatives has widened, from 42% in 2014 to 62% this year.

“Remittances have dropped over the years from 58% of adults remitting in 2014 to 38% in 2022,” said the Finscope Consumer Survey Report Zimbabwe 2022 launched by the Reserve Bank of Zimbabwe this month.

Zimbabwe has an expat population of about 1 million, the majority – about 773 246 – of whom are settled in South Africa.

“I am having to send more because the number of beneficiaries back home is increasing as the economic challenges also worsen,” said one Zimbabwean emigrant worker in the UK.

Zimbabweans settled in South Africa are also faced with the June 2023 expiry of their exemption permits and it is expected that some of them will be travelling back home.

The percentage of diaspora Zimbabweans sending money back home through family and friends dropped from 5% to 3% over the same period, the Finscope survey report found. Those using informal channels decreased from 5% to 4%.

Diaspora Zimbabweans sending money back home through banking channels declined from 5% to 1%. This is despite the impact of the Covid-19 pandemic that limited informal channels between 2020 and 2022 when restrictions in many countries were eased.

Additional data shows that expat Zimbabweans using other non-banking but formal channels to send money back home remains higher at 30% in 2022 although much lower than the 43% recorded in 2014.

“Those who have remitted mainly used other formal channels such as mobile money and money transferring agencies like Western Union, Mukuru, Hello Paisa, WorldRemit, etc,” said the Finscope survey.

About 84% of Zimbabwe’s expat population “emigrated for employment reasons”, while 9% and 5% “emigrated for family reasons and study/education”, respectively, according to the 2022 Zimbabwe census data.

World Bank statistics showed in November that “intraregional migrants in Africa comprise more than 70% of all migration” from or within the region.

The drop in the number of remittances by Zimbabweans could be due to “the impact of Covid-19 on livelihoods” or low incomes owing to the global economic meltdown that has followed the pandemic.

“Cross border remittances have increased but domestic remittances have drastically reduced. Almost half of the adults have remitted money locally to their loved ones compared to 2014,” adds the Zimbabwe consumer survey report.

Although the total number of Zimbabweans sending money to friends and relatives has been declining, the value of remittances from outside the country has been growing.

The World Bank estimates that remittance flows to Zimbabwe will top $2 billion this year against $1.4-billion in 2021 and $1-billion in 2020.

Some analysts said this week that the increase in diaspora remittance values for Zimbabwe was attributable to increased investment activities by Zimbabwean emigrants, which has boosted activity in sectors such as construction.

However, the World Bank, in a joint report with Knomad says that “growth in inward remittances is expected to decrease 5.2% in 2022” across Sub Saharan Africa.

“And as adverse conditions in the global environment persist, and uncertainty regarding major county-specific developments in Africa heighten, remittances are projected to ease further to a gain of 3.9% in 2023.”