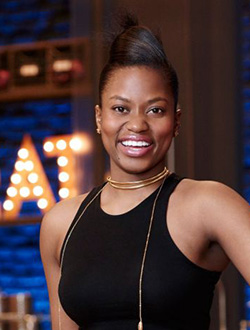 ZIMBABWE-BORN private chef, Rue Rusike is part of the cast of Season 11 of top US television series Food Network Star which premiered on Sunday.
Rue is one of 12 talented hopefuls competing to become the next new face in food television.
Having lived in several countries the world over 26-year-old Rusike currently calls Brooklyn home, and works there as a private chef.
Her “passion” is the cuisine of southern Africa, which she hopes she can share with a larger audience thanks to Food Network Star.
Rusike took full advantage of New York’s culinary riches by getting jobs at top restaurants in the city and honing her Southern African cuisine as a private chef.
“Living, cooking and working in New York City is every chef’s biggest dream come true,” said Rue, who worked at 11 Madison Park and Regency Bar & Grill before opening her own Williamsburg restaurant, Station.
In the biggest audition of their lives, the finalists battle in a series of unique challenges designed to determine who has the personality, on-air charisma and cooking skills to win the ultimate prize – their own show on cable and satellite channel Food Network.
The series started on Sunday and the winner will be crowned in the season finale on Sunday, August 16.
The channel says a Food Network Star contestant’s “success requires an uncompromised drive to stand out and shine, and having the right partners, tools and expert guidance allows this group to compete at the level they need to excel and, for one, to ultimately win”.
“Each season, our viewers love following the journey of Food Network Star contestants as they develop from aspiring newcomer to confident pro,” added Bob Tuschman, General Manager and Senior Vice President of the channel.
Advertisement