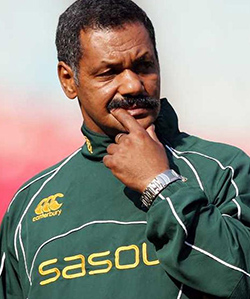 This article is taken from KweséESPN.
THE Zimbabwe rugby community is in an upbeat mood following last week’s appointment of Peter de Villiers as Sables coach, with many hoping the former Springboks supremo will help bring some desperately needed respite after a prolonged period of turmoil and underachievement.
From Zimbabwe Rugby Union (ZRU) officials to Sports Minister Kazembe Kazembe and a few Sables legends, everyone seems convinced Zimbabwe are now on a path to recovery in the wake of De Villiers’ appointment.
The man himself will have little time to acclimatise as he plunges straight into battle in the Rugby Africa Gold Cup, which this year assumes the added significance of determining the continent’s representatives at next year’s Rugby World Cup in Japan.
The Sables have fared dismally in the competition over the last two editions and the hope is that De Villiers’ arrival, along with the general positivity enveloping the sport since the ushering in of a new administration last December, will spark an uptick in fortunes.
De Villiers has wasted no time in getting down to business, flying to South Africa just two days after his appointment to begin the task of persuading Zimbabwe’s foreign-based players to return to the fold.
Attracting top talent based in foreign leagues has proved a huge challenge for Zimbabwe, with a lack of finances coupled with a general sense of despondency playing a huge role in turning off many stars.
Former Zimbabwe internationals Brendon Dawson, Kennedy Tsimba, and Costa Dinha foresee a change of attitude in the De Villiers era.
Dawson, one of the few people to have captain and coached the Sables in the past, will be assistant to De Villiers. He is confident that brighter days are on the horizon.
“We now have a coach that people inspire to be coached by, and that’s why we are hoping that those players outside the country now look at it and say, ‘Well the structures are there, the money, the systems are all put in place. There is a top-level coach involved, let’s go back to Zimbabwe,'” Dawson said in interview aired on local radio station SpotFM.Advertisement

Tsimba, who had a successful career in South Africa, told KweséESPN that De Villiers would “certainly bring some interest to Zim Rugby with his profile and I am positive we now have a good chance in the World Cup qualifiers.”
Zimbabwe rugby fans have indeed endured the most punishing of experiences in recent years as the Sables completed a stunning transformation from being one of the leading lights in continental rugby to a virtual punch-bag.
Things have turned particularly hopeless over the last two years, with Zimbabwe emerging bottom of the pile without a single win in the 2016 Africa Cup Division 1A. An expansion of the elite group to six teams in 2017 brought no relief for the Sables, who still finished second-bottom with only newly-promoted Senegal faring worse.
Sables great Dinha told KweséESPN that it is “organising the talent to perform in terms of preparations, welfare and incentives that has been letting us down.”