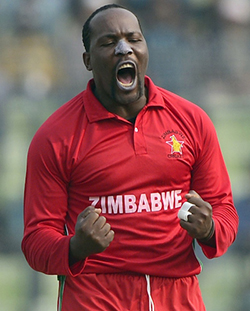 ZIMBABWE Cricket (ZC) have sacked captain Hamilton Masakadza and head coach Dav Whatmore, following the board’s review of the team’s performance at the World T20 in March.
ZC has given Graeme Cremer and Makhaya Ntini the interim roles of captain and head coach, respectively, while appointing Lance Klusener as batting coach on a two-year contract.
“The Zimbabwe Cricket board has made some changes following its review of the technical reports on the senior men’s performance at the 2016 ICC World Twenty20 tournament which was hosted by India earlier this year,” ZC said in a statement Tuesday.
Head coach Davenell Whatmore has had his contract terminated with immediate effect. Bowling coach Makhaya Ntini has taken over in an acting capacity until the appointment of a substantive head coach.
The board has also restructured the selection panel, which will now consist of a convener, the head coach, and the assistant coach.
Tatenda Taibu, the former Zimbabwe captain, has been appointed convener, and, according to a ZC release, “will have additional responsibilities in development and high performance, and will also assist ZC in bringing former Zimbabwe players back into local cricket.”
The loss of captaincy completes a strange few months for Masakadza: he was dropped in October 2015, then came back, scored heavily and took over the captaincy in all three formats following Elton Chigumbura’s resignation in January.
He had a modest World T20, scoring 20, 12 and 11, and was run-out twice, exemplifying an error-prone Zimbabwe side that failed to reach the Super 10 stage of the tournament.
The leg-spinner Cremer, one of Zimbabwe’s most consistent performers leading up to the World T20, missed the tournament with a fractured left forearm.
The former Australia batsman Whatmore, who has previously coached Sri Lanka, Bangladesh and Pakistan, took over as Zimbabwe’s head coach in December 2014, after Steve Mangongo’s sacking following a fractious five-month reign.
Ntini, the former South Africa fast bowler, was appointed as his assistant in January 2016.
ESPNcricinfo understands Mangongo is the frontrunner to take over again as head coach in the coming months.
Klusener, the former South Africa allrounder, has prior involvement with Zimbabwe cricket. He played for the Mutare-based Mountaineers franchise in 2010. Klusener was one of the big-name signings for the Stanbic T20.Advertisement

Like many of the internationals who played in that event, Klusener was not paid in full and was understood to still be owed money by ZC several years after the tournament.
His latest coaching assignment came to an end in February, when he was sacked by the South African domestic franchise Dolphins.
Before that, he served a short stint as a lower-order batting consultant to South Africa’s Test side ahead of their home series against England.
Taibu returns to Zimbabwe cricket after four years, having retired at the age of 29 to pursue a career as a pastor. He has recently been playing club cricket in the UK.